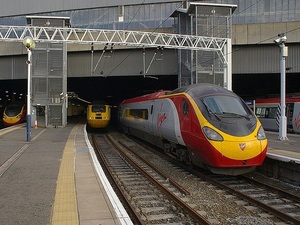 Britain's government on Tuesday approved the construction of a high speed rail network linking London with cities in central and northern England from 2026 at a cost of almost £33 billion.

Supporters of High Speed 2, which will see journey times between London and Britain's second biggest city Birmingham slashed to 49 minutes from around 1.5 hours now, say it will boost Britain's economy in both the short and long term.

Opponents argue it is too expensive and that building a new rail line carrying trains travelling 225 miles (360 kilometers) per hour will scar England's countryside.

"I have decided Britain should embark upon the most significant transport infrastructure project since the building of the motorways by supporting the development and delivery of a new national high speed rail network," Secretary of State for Transport Justine Greening said in a statement.

"By following in the footsteps of the 19th century railway pioneers, the government is signaling its commitment to providing 21st century infrastructure and connections -- laying the groundwork for long-term, sustainable economic growth."

Britain's coalition government estimates the project will generate benefits of up to £47 billion and fare revenues of up to £34 billion over a 60-year period.

The network will provide high speed links between London in the south and Birmingham in central England and later to both Leeds and Manchester in the northwest.

The government also announced plans to link London's Heathrow Airport to continental Europe via Britain's current high speed rail line HS1 which connects the capital to Paris and Brussels via the Channel Tunnel.

The HS2 line from London to Birmingham and its connection to HS1 are expected to open in 2026, followed in 2032-33 by high speed links to Manchester, Leeds and Heathrow.

Tuesday's announcement follows "one of the largest national consultations ever undertaken by the Department for Transport," Greening said.

"It is clear from the consultation that a national high speed rail network -- High Speed 2 -- generates strong feelings, both in favor and against the scheme," she acknowledged in her statement.

To appease opponents of the scheme, including some members of parliament from her own Conservative party, Greening announced extra tunneling for sections of the 140-mile route between London and Birmingham.