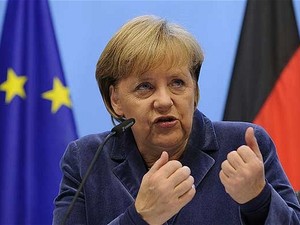 German Chancellor Angela Merkel was due to meet IMF chief Christine Lagarde later Tuesday for talks set to focus on Greece as it races to reduce its debt in a bid to secure more aid.

A day after Merkel hosted French President Nicholas Sarkozy for their first tete-a-tete of 2012, she will press on with an intensive three-day diplomatic push as the Eurozone crisis shows no signs of abating.

Greece must ensure the "rapid implementation" of reform measures, she told reporters after the talks with Sarkozy, warning that "otherwise it will not be possible to pay the next (aid) tranche to Greece.

"But this is what we want and we want Greece to remain in the Eurozone," she underscored, adding that Greece would feature in her talks with the chief of the International Monetary Fund.

Her meeting with Lagarde is due to take place at 1900 GMT after the IMF head holds talks with German Finance Minister Wolfgang Schaeuble. No press conferences are scheduled.

On Wednesday, Merkel is due to host Italian Prime Minister Mario Monti, whose government is racing to tackle his country's financial woes with a draconian austerity plan.

Athens again faces intense pressure after the IMF reportedly expressed growing doubts over Greece's long-term ability to reduce its debts and ahead of a crucial assessment of its latest efforts.

International auditors are due back in Greece next week to take stock of the country's economy after Prime Minister Lucas Papademos warned of an "uncontrolled default" in March if no further aid was forthcoming.

Having already received most of a 110-billion-euro ($140 billion) rescue package from the EU and IMF in 2010, the Eurozone reached a preliminary accord for a second 130-billion-euro Greek bailout in October.

However, this rescue package depends on Greece reaching a deal with private investors to accept at least a 50-percent loss on the Greek government bonds they hold, saving Athens another 100 billion euros.

In a test of market sentiment, Greece, which is more than 350 billion euros ($448 billion) in debt, paid slightly lower rates Tuesday to raise 1.6 billion euros in a sale of six-month treasury bills.

Financial markets saw some respite Tuesday with the euro regaining ground against the dollar after it slid to its lowest level since September 2010.

European equity markets also rallied early Tuesday mirroring strong gains across Asia in the wake of positive US economic data but Asian shares gave only a tepid response to the "Merkozy" meeting.

Meanwhile the euro was stable against major currencies in Asian trade.

Adding to Sarkozy's woes as he fights for re-election in April were data confirming the French economy posted no growth between the third and fourth quarters of 2011.

"The situation is tense, very tense," Sarkozy told reporters after his talks with Merkel in which they both vowed to speed up a raft of measures to combat the debt turmoil.

Sarkozy said an accord on tighter fiscal integration for all EU states apart from Britain should be penned by March 1, while Merkel said negotiations on the text were progressing well.

Paris and Berlin could also accelerate payments into a permanent bailout fund due to take effect this year, she said adding this would again "make our trust in, and support for, the Eurozone clearly visible".

Merkel welcomed as a "good initiative" French plans to introduce a controversial tax on financial market transactions alone if necessary but stressed she would prefer a broader approach.

Analysts saw little by way of new developments from the meeting.

Thomas Harjes, economist at Barclays Capital Bank, said comments by Merkel and Sarkozy on Greece signaled they were "well aware of the risks to the euro area's cohesion.

"However, we believe they urgently need to formulate and clearly communicate a comprehensive vision for a sound and stable euro area that deserves the name 'fiscal stability union'," he said.