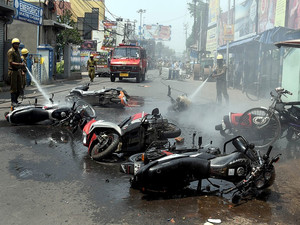 Modi's Hindu nationalist Bharatiya Janata Party (BJP) and the Trinamool Congress -- which runs the state -- have accused each other of instigating weeks of violence during and since India's recent election.

A police official said the bodies of two BJP members were found hanging from a tree in Howrah district over the past 48 hours, while a Trinamool stalwart was killed by a crude bomb blast late Monday, east of Kolkata.

On Saturday four people died and at least 18 were injured in gun battles between BJP and Trinamool supporters in Sandeshkhali district.

The BJP, which has traditionally held sway in the Hindi-speaking belt in the north, has been trying hard to pick up support in West Bengal.

In the elections that ended last month with a big national victory for Modi, the BJP increased its tally of seats in the state to 18 from just two at the last vote in 2014.

"There is a continuous sense of fear," resident Rabin Mondal told AFP by telephone. "We are spending sleepless nights. Many have fled."

Political killings are rife across India. National Crime Bureau data showed more than 100 political murders in 2016, but experts say the figure was likely much higher.