Rare Exchange of Fire between Israeli Troops and Palestinian Security 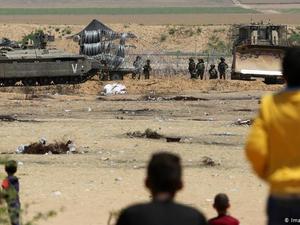 Israeli troops exchanged fire with Palestinian security forces in the occupied West Bank on Tuesday in a rare shootout Israel's army said was the result of mistaken identity.

The Palestinian governor of Nablus, Ibrahim Ramadan, said that two members of the Palestinian security forces were lightly wounded in the incident in the early hours of the morning adjacent to their headquarters.

He told reporters the Israelis said they came under fire first and then responded by shooting at the headquarters building, but questioned why they were there in the first place.

"Where is the headquarters? It is in central Nablus," he said outside the facility, where a number of windows were shattered.

"What is the Israeli army doing in Nablus? What are they doing near the headquarters? There was no coordination on this matter," he said.

The Israeli army said in a statement that the troops were on an operation to round up suspected Palestinian militants when they opened fire at what turned out to be the wrong target.

"Exchanges of fire broke out between (troops) and those identified by the force as suspects. In retrospect, it turned out that these were members of Palestinian security forces," it said.

"There are no casualties to our forces. The incident will be investigated," it added.

Under the Oslo peace accords between Israel and the Palestinians, Nablus, in the northern West Bank, is designated as being under full Palestinian security and administrative rule.

But as in other ostensibly autonomous Palestinian areas, Israel regularly sends its forces in whenever it deems it necessary for Israeli security.

This story has got everybody not talking.