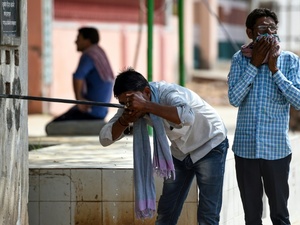 The heatwave -- India's second-longest on record -- prompted authorities in part of the northern state, one of the country's poorest, to impose curfew-like restrictions.

Daytime temperatures across large parts of India have hovered above 40 degrees Celsius (104 Fahrenheit) for the past 32 days, just one short of a record 33-day period in 1988.

Temperatures touched 50.3 degrees Celsius in the town of Churu in the northern desert state of Rajasthan recently, just below India's record of 51 degrees.

Severe heat there has killed 78 people -- most of them aged above 50 -- across three districts since Saturday afternoon, local official Sandeep Kumar told AFP.

More than 130 others were undergoing emergency treatment for heatstroke in various hospitals.

Authorities in Gaya district which has borne the brunt of the heatwave invoked an Indian law to prohibit residents from going outdoors for non-essential work.

The district magistrate also banned construction work and any outdoor programme between 11:00 am to 4:00 pm.

Heatstroke is usually caused by prolonged exposure to sun or from physical exertion in high temperatures.

It has left more than 36 people dead in southern India in recent weeks. Large parts of India are also reeling from drought, with annual monsoon rains late in coming.

Last week four passengers on a train travelling from Agra -- the city of the Taj Mahal -- to Coimbatore in the country's south died from heatstroke.

Bihar, home to some of India's worst health indicators, has also been struggling with an outbreak of Acute Encephalitis Syndrome (AES), a viral infection, since the start of this month.

Eighty children have now died in the state's biggest government-run hospital -- the Sri Krishna Medical College and Hospital (SKMCH), in the city of Muzaffarpur -- and 17 others at a private facility, health official Ashok Kumar Singh said.

Most of the victims had suffered a sudden loss of glucose in their blood, Singh told AFP.

TV channels showed distraught parents sitting next to their children, several of whom were cramped on one bed.

One parent heckled India's Health Minister Harsh Vardhan as he took his entourage around the SKMCH for an inspection.

A doctor told a local TV channel that the SKMCH was ill-equipped to handle the rush of patients, most of whom were wheeled in semi-conscious.

The outbreak of the disease has happened annually during summer months in the same districts since 1995, typically coinciding with the lychee season.

Several years ago US researchers had said the brain disease could be linked to a toxic substance found in the fruit.

Known locally as Chamki Bukhar, the disease claimed a record 150 lives in 2014.

They also said more study was needed to uncover the cause of the illness, which leads to seizures, altered mental state and death in more than a third of cases.

Outbreaks of neurological illness have also been observed in lychee-growing regions of Bangladesh and Vietnam.