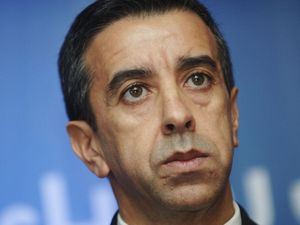 Haddad was arrested in late March on the border with Tunisia, in possession of two passports and undeclared currency, days before Bouteflika resigned in the face of mass protests.

Haddad, who owns Algeria's largest private construction company, is the first high-profile figure with ties to Bouteflika to be jailed since the president stepped down.

He was found guilty of the "unjustified procurement of administrative documents" and also fined 50,000 dinars ($420), state television reported.

Described by Forbes as one of Algeria's wealthiest entrepreneurs, Haddad is widely perceived to have used his links to Bouteflika to build his business empire.

The businessman had denied breaking the law and said he obtained his second passport legally after seeking an interview with then prime minister Abdelmalek Sellal.

The ex-premier and Haddad are among many businessmen and former politicians caught up in a separate anti-corruption investigation launched since the president stepped down.

The sentence is significantly lower than the 18 months term and fine of 100,000 dinars requested by the prosecutor.

Hassane Boualem, then director of titles and secure documents at the interior ministry, was given a two-month suspended sentence and fined 20,000 for issuing Haddad's second passport in 2016.

He told the court he was following the orders of his superiors -- interior ministry head Hocine Mazouz, Sellal and Algeria's current premier Noureddine Bedoui -- who were not investigated over the affair.