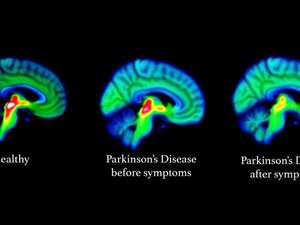 Scientists said Thursday they had found the earliest signs of Parkinson's disease in the brain years before patients show any symptoms, a discovery that could eventually lead to better screening for at-risk people.

Parkinson's, a neurodegenerative disorder that causes patients movement and cognitive problems, is estimated to effect up to 10 million people worldwide.

It is diagnosed by a build-up in the brain of a specific protein, a-synuclein, the cause of which is unclear.

However some people are born with a genetic mutation that makes them almost certain to develop the disease at some stage in their life.

Researchers from King's College London compared data from 14 individuals carrying the mutation with that of 65 non-genetic Parkinson's patients and 25 healthy volunteers.

They found that changes in the serotonin system in the brains of Parkinson's sufferers started to malfunction well before other symptoms occurred.

"We found that serotonin function was an excellent marker for how advanced Parkinson's disease has become," said Heather Wilson, from the university's Institute of Psychiatry, Psychology and Neuroscience.

"Therefore, brain imaging of the serotonin system could become a valuable tool to detect individuals at risk of Parkinson's diseases, monitor their progression and help with the development of new treatments."

Suspected causes of the disease before the study included levels of the neurotransmitter dopamine, and there is growing evidence of a possible link between Parkinson's and gut function, though this is poorly understood.

"Picking up on the condition earlier and being able to monitor its progression would aid the discovery of new and better treatments that could slow the loss of brain cells in Parkinson's," said Beckie Port, research manager at Parkinson's UK, who was not involved in the study.

"Further research is needed to fully understand the importance of this discovery, but if it is able to unlock a tool to measure and monitor how Parkinson's develops, it could change countless lives."

The research was published in The Lancet Neurology.