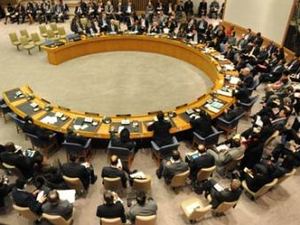 The appeal follows moving testimony in April from Nujeen Mustafa, a young Syrian with cerebral palsy, who trekked with a wheelchair from her homeland all the way to Germany as a refugee. She urged the council to focus more on Syria's "invisible" disabled people.

Thursday's 11-point resolution was passed unanimously and sponsored by Britain and Poland.

The text "urges all parties to armed conflict to take measures, in accordance with applicable international law obligations to protect civilians, including those with disabilities, and to prevent violence and abuses against civilians in situations of armed conflict."

It also says states should end impunity for crimes committed against civilians, including those with disabilities.

The council also highlighted what it called the benefit of "providing sustainable, timely, appropriate, inclusive and accessible assistance to civilians with disabilities affected by armed conflict."

Some diplomats called the resolution largely symbolic, but it has the force of law for member states and marked the first of its kind for the U.N. in its efforts to protect civilians in war zones.

Mustafa said there are more than 175,000 disabled people in the jihadist-controlled northwest region of Idlib, which has been hit hard by government and Russian bombardment.