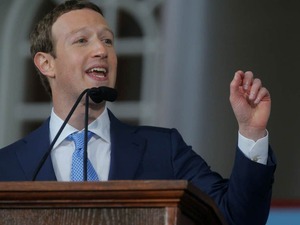 Facebook boss Mark Zuckerberg said Wednesday that a lack of action by US authorities on fake political content on the platform after the 2016 US election helped pave the way for a subsequent avalanche of online disinformation.

The CEO -- who has himself been widely criticised for a lackluster response to fake news -- also called on governments to further regulate private data, political advertising and step up efforts to prevent state actors from interfering in US elections.

"As a private company we don't have the tools to make the Russian government stop... our government is the one that has the tools to apply pressure to Russia," he said during an on-stage interview at the Aspen Ideas Festival in Colorado.

"After 2016 when the government didn't take any kind of counter action, the signal that was sent to the world was that 'ok we're open for business', countries can try to do this stuff... fundamentally there isn't going to be a major recourse from the American government."

Zuckerberg also said the leading social network is struggling to find ways to deal with "deepfake" videos which have the potential to deceive and manipulate users on a massive scale.

The comments come amid growing concern over deepfakes -- which are altered by using artificial intelligence to appear genuine -- being used to manipulate elections or potentially spark unrest.

Earlier this month, Facebook's Instagram network decided not to take down a fake video of Zuckerberg himself, saying the CEO would not get special treatment.

Online platforms have been walking a fine line, working to root out misinformation and manipulation efforts while keeping open to free speech.

Zuckerberg said this is a constant challenge, repeating his position that Facebook should not be an arbiter of truth on the internet.

"I do not think we want to go so far towards saying that a private company prevents you from saying something that it thinks is factually incorrect to another person," he said.