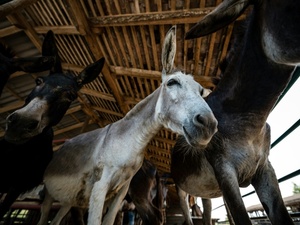 White, dense and rich in flavour, Serbia's one-of-a-kind donkey cheese is not only tasty but good for your health, says maker Slobodan Simic.

Since 2012, Simic and his team of farmers have been milking a herd of more than 200 donkeys who live on a nature reserve northern Serbia called Zasavica.

Their milk has similar properties to breastmilk and is touted by Simic as a cure for a range of ailments, including asthma and bronchitis.

"A human baby can take this milk from the first day, without having it diluted," he says, calling it a "wonder of nature."

While a lack of scientific studies make it difficult to assess its health properties, the milk is high in protein and has been recognised by the UN as a good alternative for those with allergies to cow's milk.

But "what no one in the world does, and could never make, is the donkey cheese," Simic says of his flagship product.

Donkey milk has low levels of casein -- a type of protein that acts as a binding agent in cheese-making.

But a staff member at Zasavica discovered that portions of donkey milk could be mixed with some from goats in order to craft the crumbly mounds of cheese.

The mixture also helps make up for the fact that donkeys produce less than a litre of milk a day -- a fraction of the 40 litres a cow can provide.

The farm sells between six and 15 kilos of cheese a year, mainly to foreigners and tourists who visit, says Simic.

For Simic, the business is also a way to protect the Balkan donkey, an animal that has become less prevalent as machines take their place in agriculture.

"We are maintaining the need for this animal and now there are more and more donkey farms, the demand for donkeys is higher... which is a very good thing for us and the region," he says.

The unique product made headlines in 2012 after false rumours spread that Serbia's tennis star Novak Djokovic had bought up an annual supply -- which he denied.