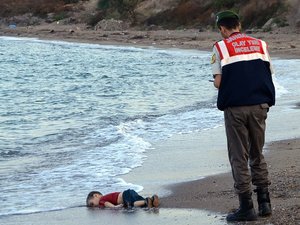 Family members have sharply denounced a new film about the young Syrian boy who became a symbol of Europe's migration crisis after wrenching photos emerged of his lifeless body washed up on a Turkish beach.

The boy perished in 2015 along with several other family members fleeing Syria as they tried to reach Greece by boat.

The heartbreaking photo of Alan's body, face down on a beach, sparked a deep emotional reaction in Europe, pushing the European Union to temporarily open its borders to Syrian refugees.

Tima Kurdi told the CBC in an article posted Friday that no one had asked the family's permission to make the new movie about her nephew. She said she had learned about it only from the boy's father, Abdullah Kurdi, who is now living in Iraq.

"He called me and he was crying, too," she said.

"He said, 'I can't believe somebody is already making a movie.' He said, 'I cannot even imagine that my dead son -- two years old who can't even talk -- I cannot imagine him coming alive'" on film.

The movie, titled "Aylan Baby (Sea of Death)," is being filmed in Turkey, with a cast including American action film star Steven Seagal, the CBC said.

(Initial reporting gave Aylan as the spelling of the boy's name.)

Its Turkish writer/director, Omer Sarikaya, has posted photos of the film's poster on social media. He hopes to sell the movie to Netflix.

According to Tima Kurdi, who has published a book about her nephew titled "The Boy on the Beach," the family has turned down several proposals for a film.

Sarikaya, for his part, told CBC that while the theme of his film resembled the story of the Kurdi family, it was much broader in scope, dealing with the overall refugee crisis.

"This will be 'Aylan Baby,' it will not be 'Aylan Kurdi,'" he said, adding that it was now too late to change the title.

But one apparently early version of the movie poster seen on Sarikaya's Instagram account shows the famous boy-on-beach photo under the words "Aylan Kurdi (Sea of Death)."