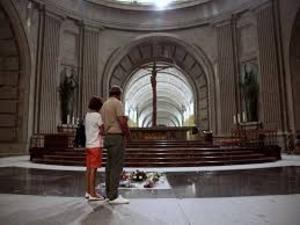 Spain on Monday accused the Vatican of "interference" in its internal affairs after the papal envoy in Madrid criticised government plans to move dictator General Francisco Franco's remains from a vast mausoleum.

Franco, who ruled with an iron fist from the end of the 1936-39 civil war until his death in 1975, is buried in an imposing basilica carved into a mountain at the Valley of the Fallen, 50 kilometres (30 miles) outside Madrid. A 150-meter (500-feet) cross towers over the site.

Plans to exhume his body have caused bitter divisions in Spain.

The Vatican had kept silent on the issue but in an interview published Sunday, the papal nuncio Renzo Fratini said Spain's Socialist government had "resuscitated Franco" by stirring a public debate over its exhumation plans.

"It would be better to leave him in peace, most people, politicians, think this way because 40 years have passed since his death, he has done what he has done, God will judge," Fratini added.

"Today, or tomorrow at the latest, the Vatican will receive a formal complaint," she added.

Built by Franco's regime between 1940 and 1959 -- in part using the forced labour of some 20,000 political prisoners -- the monument holds the remains of 37,000 dead from both sides of the conflict. The civil war was triggered by Franco's rebellion against an elected Republican government.

The government had announced the exhumation of Franco's remains would take place on June 10 but just days before, Spain's Supreme Court ordered that it be suspended while it considered an appeal from his family against the plan.

The Vatican has not opposed the exhumation and has up until now kept its distance from the topic, which divides opinion in a country still sharply conflicted about the nationalist regime.