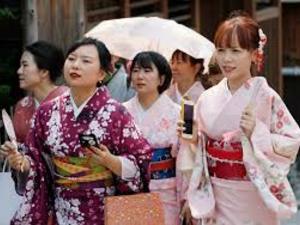 "Kimono" is now a no no, Kim Kardashian West said Monday.

The pop culture icon announced that she will change the name of her new "Kimono" line of underwear, after being accused of cultural appropriation.

Kardashian, who is married to rapper Kanye West, sparked a social media storm last week when she unveiled the new line, with some in Japan accusing her of disrespecting the traditional outfit.

Following the backlash, which included the trending Twitter hashtag #KimOhNo, Kardashian revealed on Twitter and to her 142 million followers on Instagram that she would change the name.

"When I announced the name of my shapewear line, I did so with the best intentions in mind," Kardashian said.

"My brands and products are built with inclusivity and diversity at their core and after careful thought and consideration, I will be launching my Solutionwear brand under a new name," she said.

Once a standard of the Japanese wardrobe, the kimono is now often reserved for special occasions, such as weddings and coming-of-age ceremonies, and is mostly worn by women.

The mayor of Japan's ancient capital Kyoto was among those who asked the reality television star to consider renaming her shapewear line.

"Kimono is a traditional ethnic dress fostered in our rich nature and history," Kyoto Mayor Daisaku Kadokawa wrote in a letter to Kardashian.

"(I) ask you to reconsider your decision of using the name Kimono in your trademark," Kadokawa said.

Explaining her decision to change the name, Kardashian said "being an entrepreneur and my own boss has been one of the most rewarding challenges I've been blessed with in my life.

"What's made it possible for me after all of these years has been the direct line of communication with my fans and the public," she said. "I am always listening, learning and growing -- I so appreciate the passion and varied perspectives that people bring to me."