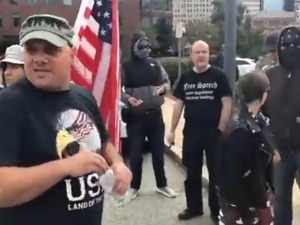 Organizers of a U.S. parade that is supposed to celebrate heterosexual pride say they have received suspicious envelopes in the mail and view them as hostile.

The procession is scheduled for late August in Boston and seen as a gesture to counter gay pride parades that have become a common feature in the cultural calendar of many US cities.

"I was the first one to find one in my mail box," said Samson Racioppi, one of three organizers of the so-called Straight Parade scheduled for August 31.

"This envelope immediately struck me as different," he said.

It had no return address, was sealed with tape, felt bulky and the content seemed granular like sand, said Racioppi.

"All those were red flags to me," said Racioppi, the treasurer of Super Happy Fun America, the group behind the march.

He said the organization's president and VP had received similar envelopes.

Police found only glitter and vague ominous letters inside the envelopes, the organization wrote on its blog.

This blog attributed the sending of the envelopes to what it called domestic terrorists and said it showed that some people do not want them to go ahead with the procession.

The planned parade is designed to celebrate what organizers call the diversity and culture of heterosexual people, and it has drawn a lot of criticism.

Some see in it -- the motto is "It's great to be straight" -- as a veiled attack on the gay community.

Racioppi and the other organizers deny any will to discriminate and say everybody is welcome at the march.

But they have invited a divisive figure from the far-right of American politics, Milo Yiannopoulos, who is gay.

They say they expect 2,000 people to attend.

City Hall in heavily Democratic Boston, which is considered gay friendly, has distanced itself from the march. But it has nonetheless granted a permit for it.

The course of just over a mile (two kilometers) goes through downtown Boston and ends outside City Hall.