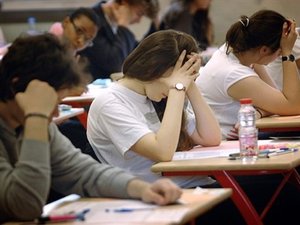 French high-school students face an anxious wait for exam results this week amid protests by teachers who are threatening not to hand over results and an embarrassing leak of baccalaureat maths papers.

Police arrested 19 high-school children on Tuesday and Wednesday in Marseille and Paris as part of an investigation into the leak of a maths paper sat by thousands of students which was shared via text message and WhatsApp in June.

Seven have since been released, while 12 remain in custody and could face charges of exam fraud, breaching trust and conspiracy, the Paris prosecutor's office said Wednesday

French education authorities have decided not to cancel the exam for the time being, which was sat by around half of the 740,000 students who completed their baccalaureat this year.

Education Minister Jean-Michel Blanquer faces another crisis caused by markers in some regions who are threatening not to return exam papers as part of efforts to resist reforms of the famed end-of-school exam from 2021.

Results are set to be published on Friday.

"At this time, I must admit there is a small risk, but we're doing everything we can to make sure it doesn't happen," Jean-Michel Blanquer told French TV station BFM.

"I have told the teachers who have decided to play this game, which completely goes against the principles of public service, that there will be very severe financial consequences," he added.

He threatened to cut "up to two weeks" of their salary.

The strike affects 108,000 of the 4.0 million exam papers submitted for marking, the "Block Blanquer" group of protesting teachers has said.

The protesting teachers are trying to convince the government to reopen talks on an overhaul of the French baccalaureat from 2021, which will see more continuous assessment and less dependence on final exams.

Thousands have taken to the streets around France in recent months. Some have occupied classrooms overnight while others have dressed in black during protests to "mourn" the exam.

French President Emmanuel Macron pledged to overhaul the Bac, as it is known, during his election campaign in 2017, saying it was failing to adequately prepare teenagers for university and the modern job market.

Blanquer has argued that the French education system relies too heavily on final exams and more than its equivalents around Europe.

The famously tricky baccalaureat, based on a structure created under Napoleon in 1808, includes philosophy brain-twisters such as "Do we always know what we desire?".

It's not the first time France has grappled with leaked exam papers.

Four students were handed suspended sentences last year after a maths problem leaked on an internet forum in 2011.