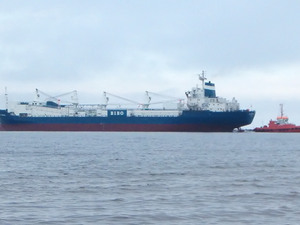 A supertanker suspected of carrying crude oil to Syria in violation of EU sanctions was detained in Gibraltar on Thursday, the territory's Chief Minister Fabian Picardo said.

The Grace 1 vessel was halted in the early hours of Thursday by Gibraltar police and customs agencies, aided by a detachment of British Royal Marines.

"We have reason to believe that the 'Grace 1' was carrying its shipment of crude oil to the Banyas Refinery in Syria," Picardo said in a statement.

"That refinery is the property of an entity that is subject to European Union sanctions against Syria."

The Grace 1 is a Panamanian-flagged tanker, according to the shipping trade publication Lloyd's List.

"We have detained the vessel and its cargo," Picardo said.

European Union sanctions against Syria have been in force since late 2011.

The 28-member bloc has imposed sanctions on 277 Syrian officials including government ministers over their role in the "violent repression" of civilians.

It has frozen the assets of some 72 entities and introduced an embargo on Syrian oil, investment restrictions and a freeze on Syrian central bank assets within the European Union.

Where does the oil come from? Why isn’t this information made public ?

All the world (except AFP and Naharnet) state categorically that the tanker left an Iranian port.

Don't have to say

ran has summoned the British ambassador in Tehran to complain about what it says was the illegal seizure of an Iranian oil tanker.

Answered by Iran's actions--no need for them to deny and decry.

It went around Africa to avoid being traced through Suez.

How naive and foolish of them to think no they’d be able to evade the five eyes and powerful satellites.

inevitably there will be many cases for these things to happen. Who in his right state of mind (apart from little john) would think Iran would play by international rules?