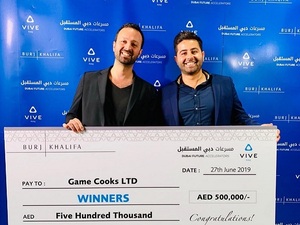 Game Cooks, a leading gaming studio of mobile and Virtual Reality (VR) content based in San Francisco and Beirut, has won the “VR and Beyond” challenge organized by Dubai Future Accelerators in partnership with Burj Khalifa and HTC Vive Middle East.

Game Cooks competed with around 115 VR companies from around the world and was shortlisted among 6 finalists before earning the first rank. The event organizers had invited VR developers and companies to build VR content for Burj Khalifa to enhance visitors’ experience. The competition rewards the most captivating and memorable user experience in virtual reality.

Game Cooks’ award winning VR experience entitled “Dubai – A Rising Falcon” was developed in a record time for the event. It earned them the first prize of AED 500,000 and the publishing of their VR experience on HTC VIVE’s Viveport. The company will also get to install its VR experience at the top of Burj Khalifa, the tallest building in the world and a global icon, making it accessible to millions of visitors.

On this occasion, Games Cooks founder and CEO Lebnan Nader said: “This award goes not only to our team of dedicated and creative developers, but also to Lebanon because it is a reminder that our country holds an impressive pool of talents whose creativity, knowledge and competence drive their success anywhere in the world no matter the conditions or the competition.”

He continued: “The VR gaming industry is expected to grow significantly over the coming five years and to bring new dynamics for both consumers and businesses. Our aim is to pursue our efforts in creating immersive experiences, new levels of interaction and new gaming content. As VR technology evolves, we will keep contributing to an elevated VR gaming experience in our home country Lebanon, the region and throughout the world.”

On his final note, Nader hoped to inspire young Lebanese developers and entrepreneurs to pursue their endeavors and to know that perseverance is key to success.