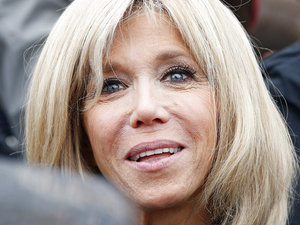 Brigitte Macron, wife of France's president and a former teacher, on Thursday lashed out at online bullying, denouncing it as "relentless" in remarks to G7 education ministers.

Addressing delegates in Sevres near Paris, the former high-school teacher urged them to "encourage young people to speak out".

Last month, an 11-year-old girl committed suicide after being repeatedly bullied by classmates and a teacher at a school near Paris in a case widely covered in the French press.

She also read out letters she had received from parents and children, including one from a 16-year-old girl who told her: "I don't live anymore, I survive."

In June, Education Minister Jean-Michel Blanquer unveiled plans to update teacher training on bullying, to extend the opening hours of a cyberbullying helpline, and to include bullying in school performance evaluations.

Although Brigitte Macron tends to keep a low profile, she regularly visits schools and charities to promote her anti-bullying work.

A former French and drama teacher, she used to work at a school in northern France where she famously met and later married now-president Emmanuel Macron when he was a pupil, 24-years her junior.