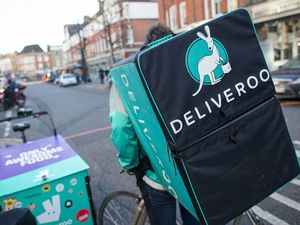 Britain's competition authority said Friday it was looking into the acquisition by U.S. online giant Amazon of a stake in Deliveroo, an app-based service firm that delivers restaurant meals to clients using bicycle or moped riders.

The Competition and Markets Authority (CMA) said it had last month served the firms with an initial enforcement order, a preliminary step that could lead to the launch of a formal merger probe.

In mid-May, UK-based Deliveroo announced that Amazon was the largest investor in its latest $575 million funding round, which would go to boosting its tech team and developing new products.

The investment would mean Amazon finally gets a foothold in Britain's fast growing food delivery business in which Deliveroo is a major player, after its own attempt to enter the market was shuttered in 2018.

The initial enforcement order sought to block the firms from carrying out steps that would lead to a de facto merger or control of Deliveroo by Amazon pending review by the CMA, although some if the terms of order were relaxed at the request of the companies.

Deliveroo said the two companies were working closely to obtain a green light from the CMA, which could block the investment if it judges it to harm competition.

The CMA did not indicate when it would issue its decision.

Created in 2013, Deliveroo has grown to delivering meals to clients in over 500 towns and cities in 14 countries, along the way becoming a "unicorn" -- a startup worth more than $1 billion.