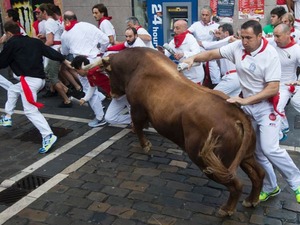 A 46-year-old American was in a serious condition after he and two others were gored during the first day of the running of the bulls in the northern Spanish town of Pamplona on Sunday, regional authorities said.

The American, aged 46, was in a serious condition after being gored in the neck, said a medical report from the Navarra regional authorities.

Another American, aged 23, and a Spaniard were also hospitalized after being gored during the bull run, one of the most crowded events of the week-long San Fermin festival. Both men were gored in the left thigh but their condition was not as serious.

Another three people, all Spaniards and aged between 18 and 38, were also hurt during the run.

The Red Cross in Spain had warned that the event would be especially dangerous because of the large number of people.

On each morning of the festival, at eight o'clock, six bulls are released from a corral to run through the narrow, cobbled streets of the old town.

Hundreds of people dressed in white shirts and red scarfs, try to run ahead of bulls to the city's bull ring, where the animals are killed by matadors in afternoon bullfights.

Sunday's run was a relatively fast one, the bulls taking just two minutes and 41 seconds to cover the 848 meters (925 yards) through Pamplona's narrow streets to the bull ring.

The week-long festival, which also involves religious processions, concerts and all-night drinking, attracts thousands of visitors from around the world.

Bull fights and bull runs are a traditional part of summer festivals across Spain.

Anyone over the age of 18 can take part in the Pamplona runs though authorities warn of the risks. Since 1911, 16 people have been killed in the event. The last death was in 2009.

The San Fermin festival and the running of the bulls was immortalized in Ernest Hemingway's 1926 novel "The Sun Also Rises".

Really that is surprising lol. We live in a world now that has men semi permanently living in the space station that orbits the earth while others do a more rewarding sport as being chased by bulls in closed space...and we expect them to be safe in this archaic act? There should be a law that says if you truly want to kill yourself through stupidity that you should for the benefits of other humans be allowed to do so.