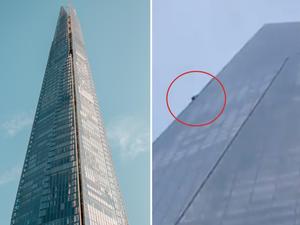 An unknown daredevil on Monday scaled The Shard in London -- currently ranked as the tallest building in the European Union -- without the apparent assistance of a safety harness or ropes.

Footage of the stunt published by British newspapers showed the man climbing near the very top of the narrow pyramid-shaped building on the banks of the River Thames.

"Police were called at 05:15 hours on Monday, 8 July following reports of a 'free-climber' on the Shard," the police department said in a statement to AFP.

"Emergency services attended and the man is now with officers. He was not arrested."

The property company overseeing the skyscraper said it could not "comment on the motive of the individual".

One man who posted footage of the climb on Twitter said the daredevil managed to get all the way to the top before being taken in by the police.

"The guy's got to the top and is being spoken to by the police," witness Kevin Williams tweeted.

The 309.6-metre-tall (1,016-foot-tall) building has been a favourite target of thrill-seekers and political campaigners out to raise awareness for their cause.

A group of Greenpeace activists scaled the building in 2013 to protest against oil drilling in the Arctic.

The last reported attempt was made in 2017 by a YouTube personality who posts video of his climbs.

The Shard secured a court injunction against Alain Robert -- popularly known as the French Spiderman -- to stop his planned attempt in 2012.

Robert's representative told AFP that the Frenchman was currently in Bali.