How Has War Affected Syria's Oil and Gas Sector? 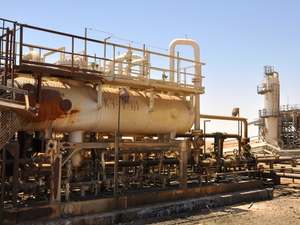 Control of these is split between the regime and the Kurdish-led Syrian Democratic Forces who have been fighting the Islamic State group.

The US-backed SDF control Syria's largest oil field in Al-Omar in the eastern province of Deir Ezzor, as well as the nearby Tanak and Jafra fields.

The Russia-backed regime, meanwhile, holds the country's largest gas field in Shaer, as well as those of Sadad and Arak.

It also controls some oil fields in Deir Ezzor, Raqa, and the central province of Homs.

Before the war, oil and gas were key to the country's economy.

In 2010, they contributed about 35 percent of export earnings and 20 percent of state revenue, the Syria Report economic publication says.

After war broke out in 2011, production plummeted as fighting and bombardment destroyed infrastructure, and the government lost control of its largest fields.

International oil companies suspended activities, including to comply with Western sanctions on the regime.

Up to $74.2 billion in revenue has been lost in the war, Oil and Mineral Resources Minister Ali Ghanem has said.

But since the regime took back Homs oil and gas fields from IS jihadists in 2017, production has increased to 24,000 bpd for oil and 17 million cubic metres for gas, according to the minister.

But this is just 20 percent of Syria's oil needs, and between 60 and 70 percent of its gas requirements.

After production plummeted Damascus had to resort to importing hydrocarbons to fulfil its needs.

The Syrian government turned to ally Iran, who opened up a credit line to supply it with oil.

But Western sanctions on oil shipping, as well as US punitive measures against Iran, have complicated imports.

In November, Washington slapped fresh sanctions on Tehran, accusing it of creating a complex web of Russian cut-out companies and Syrian intermediaries to ship oil to Damascus.

From October 2018 to the start of May this year, no oil tanker reached Syria, pro-regime Al-Watan newspaper has reported.

A fuel and gas crisis hit regime-held areas this winter and spring, causing the government to take austerity measures.

Last week, Britain detained a tanker carrying Iranian oil on suspicions it was heading to Syria, but Tehran on Sunday denied that was its final destination.

Last month, Damascus accused an unnamed foreign entity of "sabotage" of underwater pipelines to its Banyas oil refinery on the Mediterranean.

What options for Damascus?

With the country's most important oil fields in the far east still out of reach, Damascus faces two options: strike a deal with the SDF, or military reconquest.

The Kurdish-led forces have in the past insisted that any deal with the regime would have to ensure an equal sharing out of oil and gas.

Before the war, crude extracted in the east was transferred to either Homs or Banyas to be refined, whereas Syria's Kurds only have small refineries designed to meet just local needs.

Yet the regime taking back military control of the eastern oil fields would allow Syria to be self-sufficient in all petroleum products, according to the oil minister.

During the conflict the regime has bought oil from Kurdish and IS-held areas to secure part of its needs, several sources have said.

Analysts say revenues from the oil and gas sectors are likely to be key in rebuilding Syria should a peace deal be struck and sanctions lifted so exports can resume.