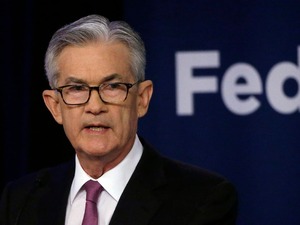 In his highly-anticipated testimony to Congress, Powell said many central bankers believed the case for lower rates "had strengthened" last month given the rising "crosscurrents" in the economy.

President Donald Trump has been putting intense and constant pressure on the Fed to cut the benchmark interest rate to boost the economy, repeatedly criticizing Powell on Twitter and in public comments.

Financial markets too were looking for a clear signal about whether the central bank will cut lending rates later this month, and after a blowout U.S. jobs report on Friday investors became concerned the Fed might make them wait.

Powell was not explicit, but in his prepared statement to the House Financial Services Committee he noted that the Fed in June announced it "would act as appropriate to sustain the expansion."

After raising the key borrowing rate nine times since 2015 as the economy expanded, most recently in December, the Fed last month opened the door to a rate cut amid signs of slowing.

And Powell said that in the weeks since the June policy meeting "it appears that uncertainties around trade tensions and concerns about the strength of the global economy continue to weigh on the U.S. economic outlook."

At the same time, price measures watched closely by the Fed continue to run well below its two percent target.

"Inflation pressures remain muted," he said. "And there is a risk that weak inflation will be even more persistent than we currently anticipate."

Powell has brushed off Trump's attacks, but in his testimony he noted that Congress has granted the central bank "an important degree of independence" to conduct policy "based on objective analysis and data."

In the wake of Trump's aggressive trade policies, especially with China, Powell said businesses and farmers "report heightened concerns" about the U.S. economy.

Although the U.S. economy expanded by a solid 3.1 percent in the first three months of the year, the Fed chief said that growth was based on factors, like exports, "that are not generally reliable indicators of ongoing momentum."

The Fed still believes the U.S. economy will post solid growth, as labor markets remain healthy, but Powell pointed to other domestic concerns that need to be addressed, including "high and rising federal debt."

In addition, he said, "The relative stagnation of middle and lower incomes and low levels of upward mobility for lower-income families are also ongoing concerns."

The Fed chief is required to testify before Congress twice a year, and Powell will respond to questions from legislators, before appearing Thursday before the Senate Banking Committee.