Serena in 'Good Place and Pain-Free' at Wimbledon, Says Coach 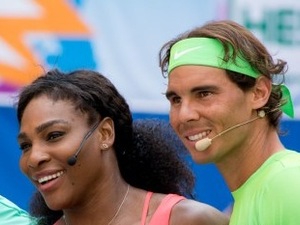 Serena Williams is in a good place, pain-free at last and 100 percent focused on winning Wimbledon, her coach Patrick Mouratoglou said Wednesday.

Williams, 37, has worked incredibly hard to come back from giving birth, and multiple injury problems, in order to target Margaret Court's all-time record of 24 Grand Slam titles, he said.

Crucially, the American's trademark ability to raise her game to another level is back -- and she has found her rhythm once more, the coach said.

Williams, the 11th seed, takes on the Czech world number 54 Barbora Strycova on Thursday in the semi-finals.

"She's in a good place at the moment. She's happy," Mouratoglou told reporters.

"Her husband is here, her daughter is here, and she's pain-free now for three weeks.

"When you focus on your pain every day, it's very difficult to prepare well for tournaments.

"You compete with pain, so it's difficult to focus on the match because you're suffering.

"Now things are different. And when she's playing, she's 100 percent focusing on the game and on winning.

"She's raised her level when it was necessary, which is one of her trademarks, and this is back, so everything's positive."

The Greek-French tennis coach, 49, has been working with Williams since 2012 -- a partnership that has produced 10 of the American's 23 Grand Slam singles titles.

"That's why she came back to playing tennis after having a baby and so many medical complications," he said.

"The effort she's put in, I've never seen something like this.

"You have no idea how hard she worked to come back to that level, and she came back for that, so it will probably mean a lot if she makes it."

Williams, a seven-time Wimbledon champion, had a knee problem that held her back at the French Open but worked with a Paris doctor to fix it.

Mouratoglou could then work on preparing her for Wimbledon, even if she was lacking match practice.

"If she's well prepared, even though she's not playing her best tennis in the first matches, she's most of the time able to find a way through," he said.

And in a warning to her rivals left in the tournament, he said: "I knew that match after match, she will get better and better."

"Serena is not only serve and return. She is able to do a lot of other things. They are two of her bigger assets," the coach said.

"And on grass, when you're very good on those two things, you have a big advantage."