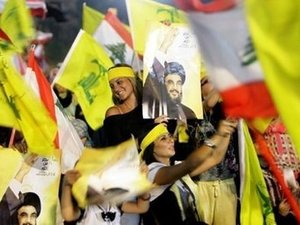 Aoun said the U.S. decision to target lawmakers was regrettable, adding that his government will pursue the matter with American officials.

The president said the decision contradicts previous U.S. positions vouching for the commitment of Lebanon and its banking sector to international agreements combating money laundering, funding terrorism and other criminal activities.

Hariri meanwhile said that the sanctions took a "new course" when they hit elected lawmakers but urged that the issue not be exaggerated to avoid aggravating already tense domestic relations.

"This will not affect parliament or the work that we do both in parliament and in the Council of Ministers," Hariri said during a function in Beirut. "It is important that we preserve the banking sector and the Lebanese economy, and God willing, this crisis will pass sooner or later."

"The most important thing that we must work on at present is to secure the needs of the Lebanese citizens and provide them with a good economic situation because they are fed up with political rhetoric and slogans," Hariri added.

The country's top leaders were reacting a day after the U.S. Treasury Department said it is targeting two Hizbullah lawmakers and a party security official suspected of using their positions to further the aims of the Iran-backed group as well as bolster Tehran's "malign activities."

The new sanctions were the first time Washington targeted lawmakers currently seated in Lebanon's parliament -- a jab at the militant group's growing political role which seemed to have struck a nerve at a time when the country is dealing with a major economic slump.

The widening dragnet also comes as the U.S. increases its pressure on Tehran, levying new sanctions on Iran and raising tensions across the region.

Hizbullah has been under increasing financial sanctions from the United States. But Treasury officials said the latest designation, naming lawmakers Mohammed Raad who leads the group's parliamentary bloc and Amin Sherri, makes clear that there is no dividing line between Hizbullah's political and militant wings.

Hizbullah and its allies won a majority in 2018 elections and the group has three Cabinet seats, the largest number it has ever controlled. The group, founded by Iran's Revolutionary Guard in the 1980s, is among the most effective armed groups in the region and has fought several wars with neighboring Israel. Lebanon is still technically at war with Israel.

Hizbullah has also sent thousands of its fighters to Syria to fight alongside the troops of President Bashar Assad.

Lebanese groups are sharply divided over Hizbullah's growing regional clout but the local rivals have worked together to preserve a delicately balanced political system.

wow the Syrian president of Lebanon regrets the US placing sanctions on a terror organisation? He will look real unbiased to the world now lol.

Aoun is a traitor so who cares what he says... he's by definition irrelevant.

He is expected to expel the U.S ambassador and break off relations with the USA!

Never has Lebanon known or seen a president who regrets as much as this one, ever!

so sad new sanctions... those were really nice people from a great organisation.. lolll..