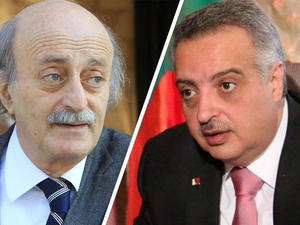 Lebanese Democratic Party leader MP Talal Arslan has reiterated his insistence on referring the deadly Qabrshmoun incident to the Judicial Council, as Progressive Socialist Party chief Walid Jumblat has slammed what he called a "juvenile jumping to conclusions.”

“Our stance is clear: the Judicial Council is the key point,” Arslan tweeted.

“The attempt to assassinate Minister (Saleh) al-Gharib will not go unpunished… and before some voice viewpoints that have nothing to do with the law, let them read well about the Judicial Council’s tasks and the type of crimes that get referred to it,” he said.

“We will not be lenient over the blood of martyrs and wounded… Let the mercenary voices shut up, the voices of those who manipulate the blood of people and innocents, to whichever political party they may belong,” Arslan added.

Jumblat hit back, stressing that “only the investigation can decide the course of justice.”

“Enough with the disinformation campaign claiming that it was an assassination attempt. The clear attack by the bodyguards in the malign convoy led to the al-Basatin (Qabrshmoun) incident,” Jumblat tweeted.

The PSP leader quickly deleted the tweet and replaced it with another.

“Only the investigation can decide the course of justice and enough with the juvenile jumping to conclusions by saying that the al-Basatin incident was an assassination attempt,” the new tweet said.

"let them read well about the Judicial Council’s tasks and the type of crimes it that get referred to it,” Arslan said.

The primary task of the judicial council is to look into acts of treason which he well qualifies for.

anyOne part of the pro Syrian/Iranian M8 coalition is de facto a traitor.

Clearly Porcelain wants to cloud the issue and claim it was an assassination attempt hence why the body guards opened up fire. Clearly the videos show that its not the case.
An assassination attempt would not have people in the streets staring blindly at the bodyguards firing at them before the danger they caused got them killed.

Th judiciary is very corrupt so no one can tell which way this will be heading apart from that Syria will not be shown to be the culprit here.