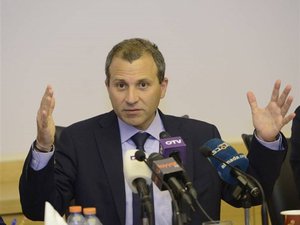 Free Patriotic Movement chief MP Jebran Bassil has proposed a swap under which Lebanese Democratic Party leader MP Talal Arslan and his allies would drop their demand for referring the Qabrshmoun incident to the Judicial Council in return for administrative appointments that “would secure the March 8 Druze and Sunnis the shares that they want,” a media report said.

“It seems that ex-MP Walid Jumblat is flexible and might accept such a bargain, but Prime Minister Saad Hariri is rejecting Bassil’s manipulation of the Sunni appointments, seeing as he is fed up and will no longer accept any haggling over his share, role and jurisdiction,” al-Joumhouria newspaper reported on Thursday.

Hariri “has delivered this message to President Michel Aoun,” the daily added.

Two bodyguards of State Minister for Refugee Affairs Saleh al-Gharib were killed and a third was wounded in a clash with Progressive Socialist Party supporters in Qabrshmoun. The minister escaped unharmed as a PSP supporter was injured.

The two parties have traded blame over the incident, with Gharib and Arslan describing it as an ambush and an assassination attempt and the PSP accusing the minister's bodyguards of forcing their way and opening fire on protesters.

Arslan has insisted that the case should be referred to the Judicial Council, a top Lebanese court that looks into national security crimes, a demand opposed by the PSP and other forces.

ohh what a great idea persil.. give him z lollipop, so the other get z kitkat.

An enemy of Lebanon

So this was never about a major security incident but all about what this midget wants!