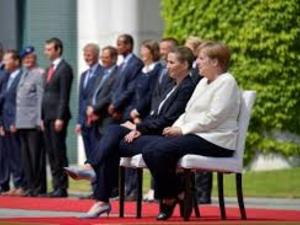 Angela Merkel sat through national anthems on Thursday during an official ceremony, as the German chancellor sought to prevent a repeat of uncontrollable shaking with a rare change of protocol.

After greeting Denmark's new Prime Minister Mette Frederiksen at the portico of the chancellery, a smiling Merkel walked her over to a podium where both leaders took their seats.

The unusual move came a day after a similar ceremony when the German chancellor was seen shaking involuntarily for the third time in public in less than a month, reviving questions over her health.

Merkel began trembling as national anthems were being played at the reception of Finnish Prime Minister Antti Rinne.

Just over an hour later, she attended a press conference as planned and told journalists that her health was no cause for concern.

She explained that she was simply still in a phase of "processing" a previous shaking spell, but that "there has been progress".

"I will have to live with it for a while," added Merkel, who turns 65 next week.

"Just like how it has come, one day it will go away too," she said.

The shaking on Wednesday was visible although less severe than during the first episode in June.

On that occasion she appeared unsteady and shook as she stood in the midday sun next to Ukrainian President Volodymyr Zelensky, whom she was welcoming with military honors.

That first bout of shaking was blamed on dehydration. But a second episode struck a week later at the end of June, just hours before she was due to board a plane for a G20 summit in Japan.

Merkel has been leader of Europe's biggest economy for almost 14 years.

Frequently called the European Union's most influential leader and the most powerful woman in the world, Merkel has said she will leave politics at the end of her term, in 2021.

Well at least she is honest about it, if it were our clown he would claim he never shakes but there is an earthquake going on. His sheep will immediately accept that and accuse the anti Bashar group of being behind the earthquake lol.