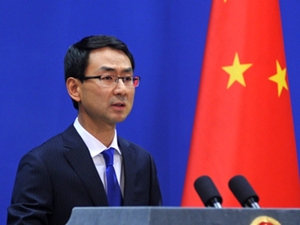 An estimated one million mostly Muslim ethnic minorities are held in internment camps in the northwest region of Xinjiang -- a system that Beijing defends as necessary to counter religious extremism and terrorism.

"It is a public politicization of human rights issues and wantonly interferes in China's internal affairs," he added.

The letter was co-signed by UN ambassadors from 22 nations -- including Australia, Britain, Germany and Japan -- and was sent to the Human Rights Council president and the High Commissioner for Human Rights.

The text included concern about "credible reports of arbitrary detention... as well as widespread surveillance and restrictions, particularly targeting Uighurs and other minorities in Xinjiang."

It also called on China to stop arbitrary detention and allow "freedom of movement of Uighurs and other Muslim and minority communities in Xinjiang."

After initially denying their existence, Beijing has gone on a public relations blitz in a bid to counter the global outcry against what it calls "vocational education centers."

Since last October, the local government has also organised tours of the camps for diplomats and media outlets.

UN human rights chief Michelle Bachelet has requested a fact-finding mission to Xinjiang and China has extended an open invitation for her to visit the region.

But the international official typically only undertakes such national visits provided the host government offers guarantees on certain conditions -- including unfettered access to key sites.

Beijing was also forced Thursday to defend its human rights record from criticism by Slovakia and Britain.

Geng warned that Hunt, who is hoping to become prime minister, should not "use China" as a way to campaign for votes and noted Wang had outlined China's "tremendous progress" in human rights, ethnic minority, and religious policies during his meeting with Caputova.