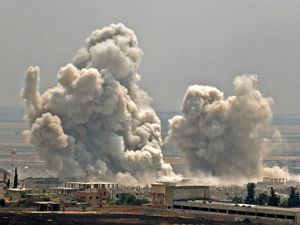 At least 10 civilians were killed Friday in Syrian regime air strikes in the country's northwest, including three children, a war monitor said.

Another 45 civilians were wounded in the strikes across the jihadist-held Idlib region, according to the Syrian Observatory for Human Rights.

Those killed included three people in Idlib city, which until Friday had been spared strikes by the regime and its Russian ally since they stepped up bombardment of the region more than two months ago.

"It's the first time that the raids hit the centre of Idlib, after being confined until now to its suburbs," said Observatory director Rami Abdel Rahman.

Last month a civilian was killed in an air strike on the outskirts of the regional capital, considered the stronghold of Syria's former Al-Qaeda affiliate Hayat Tahrir al-Sham (HTS).

The group in January took full administrative control of the Idlib region, home to three million people, although other jihadist groups and rebel factions are also present.

Russian and regime aircraft have ramped up strikes on Idlib since the end of April, killing more than 580 civilians.

Rebel and jihadist fire has killed 45 civilians over the same period, according to Observatory figures.

Ambulances were dispatched to the scene to tend to the victims, he added.

Meanwhile in neighbouring Hama province, six children were wounded by opposition fire in the regime-held area of Karnaz.

Fierce clashes have raged in the northern sliver of Hama province in recent days, with at least 22 fighters killed Friday, according to the Observatory.

At least 10 regime fighters and a dozen jihadists and allied rebels were killed in the battle near the village of Hamameyat and its strategic hilltop.

Regime forces retook the area in the north of Hama province overnight into Friday after relentless fighting, according to the Britain-based war monitor.

The latest figures bring to more than 120 the number of fighters killed since Wednesday evening, when Hamameyat was seized by rebels and jihadists.

The recent uptick in violence has forced 330,000 people to flee their homes, according to the United Nations.

Syria's war has killed more than 370,000 people and displaced millions since it started in 2011 with a brutal crackdown on anti-government protests.

This will all lead to the destruction of Israel we will told...
How many more thousand Syrians will die to keep Bashars dictatorship in power?