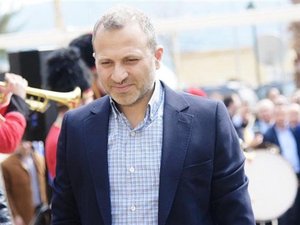 Free Patriotic Movement chief and Foreign Minister Jebran Bassil on Sunday called for “equality between Christians and Muslims” during a tour of the South governorate.

“From now until a civil state reached, we must live equality between Christians and Muslims, according to our system and constitution, but not to remain captives of sectarianism, seeing as we believe in the civil state,” Bassil said in the Marjeyon district town of Qlayaa.

“National unity means defending sovereignty first, which is indivisible, and on the anniversary of the July War, we are living the meaning of sovereignty, and had it not been for national unity, victory would not have been achieved,” Bassil added.

As for those who fled to Israel in the wake of its withdrawal from southern Lebanon in the year 2000, Bassil said Justice Minister Albert Serhan has prepared “a draft decree for devising an implementation mechanism for the law of exiles who have the right to return.”

Speaking later in the town of Ain Ebel, the FPM chief said “the time now is not for talking about the presidential election, but rather for work.”

Bassil had spent the night hosted by General Security chief Maj. Gen. Abbas Ibrahim at the latter’s residence in the town of Kawthariyat al-Siyyad.

The southern district of Hasbaya meanwhile witnessed a “war of banners” between supporters of the Progressive Socialist Party and the Lebanese Democratic Party, although Bassil is not scheduled to visit it.

“The Hasbaya of Walid Jumblat Despises the Rhetoric of Gravediggers”, a PSP banner read.

Bassil’s latest visit to the Aley district has sparked a major security and political crisis in the country after a deadly incident in the town of Qabrshmoun.

Two bodyguards of State Minister of Refugee Affairs Saleh al-Gharib were killed and a third was wounded in a clash with PSP supporters in the aforementioned town. Gharib, a member of the LDP which is allied with Bassil’s FPM, escaped unharmed as a PSP supporter was wounded.

The PSP supporters were blocking roads to prevent Bassil from touring the district, accusing him of being “sectarian” and “provocative.”

Banners and portraits should be banned everywhere. It should be illegal the hang propaganda for politicians, “martyrs”/dead terrorists or clerics.

How much are these self serving tours costing the Lebanese citizens and the treasury???

Bassil had spent the night hosted by General Security chief Maj. Gen. Abbas Ibrahim at the latter’s residence in the town of Kawthariyat al-Siyyad.