Greek Deficit to Exceed Target in 2011 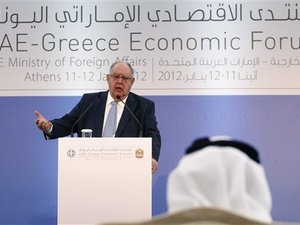 Debt-crippled Greece's budget deficit is expected to hit 9.6 percent of economic output in 2011, about half a percentage point above target, the development minister acknowledged Wednesday.

Michalis Chryssochoidis said that an increase in the use of European Union structural development funds had contributed to lowering government overspending from 10.6 percent of gross domestic product in 2010.

"The good news is that absorption of European Union funds has exceeded all expectations," Chryssochoidis said at an economic forum near Athens where the government hopes to attract investment from the United Arab Emirates.

But Greece, which is relying on billions in rescue loans from its European partners and the International Monetary Fund to keep afloat, had pledged to cut the 2011 deficit to 9 percent of GDP.

Athens had ran up high budget deficits for years, building a suffocating debt load set to exceed 160 percent of GDP in 2011. In exchange for a vital €110 billion ($140 billion) international bailout in May 2010, the country implemented a harsh austerity program, slashing pensions and salaries while repeatedly hiking taxes and raising retirement ages.

The cutbacks sparked deep popular resentment, with labor unions staging a string of general strikes and protests that often turned into street battles between stone-throwing youths and riot police.

The country's interim coalition government is now rushing to pass a new batch of reforms and cutbacks to secure a second €130 billion bailout package approved in October but not yet finalized. Prime Minister Lucas Papademos has urged defiant unions to accept further income losses, warning that the country could otherwise face a disorderly bankruptcy in March and be forced to leave the euro.

Fitch Ratings said on Wednesday that Greece's financial troubles could still worsen the eurozone crisis if it could not work out a debt reduction deal with creditors, part of the second bailout package.

Fitch's head of sovereign ratings David Riley said Greece "still has lots of potential to plunge Europe into crisis" and that "time is running out."

Greece is in talks with private investors about a voluntary 50 percent reduction in the value of their Greek bond holdings. Athens is seeking to wrap up the complex negotiations ahead of a visit by international debt inspectors, expected next week.

It needs to agree the deal before it can get another installment in its rescue loans, which it will need to repay €14 billion in bonds that come due in March.

On Tuesday, Greek Deputy Finance Minister Philipos Sachinidis said that while there was no agreement yet on the bond swap the discussions were at a "satisfactory" point.

Riley said one complicating factor in the private creditors' deal was the European Central Bank's refusal to write down its estimated €45 billion in Greek bonds. That means private bondholders have to be asked to take on more losses to reach a given reduction in Greece's debt load — which is hoped to fall to 120 percent of GDP by 2020 if the deal goes through.

Under its bailout deal, Greece has also undertaken to sell off a massive €50 billion worth of state assets — including €25 billion in real estate — but has so far only raised a total €1.56 billion.

"Our estimate is that we will have very strong demand for what we are going to put on the market," he told the Lagonissi economic forum. "One problem is that Greek assets are strongly devalued ... We are trying to close the gap between value and price to the minimum possible."

He said assets up for privatization or concession this year would include public stakes in gas, refinery and mining companies, land on the islands of Rhodes and Corfu, a northern highway, 39 regional airports and 12 harbors.