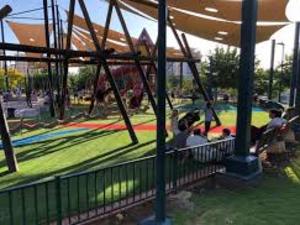 An Israeli city will end a selective closure at one of its parks that Arab citizens said was a racist policy meant to keep them out after a court decision Sunday.

The northern city of Afula had decided to keep the park open only to its residents during the summer school holiday, saying that as the facility was funded from municipal funds its residents should be prioritized.

Israeli Arab rights group Adalah however said that the move was aimed at keeping out Arab residents of nearby towns and the Arab city of Nazareth and it filed a lawsuit to overturn the ban.

Lawyers for the sides said that Nazareth District Court, which has jurisdiction over Afula, approved an agreement Sunday ending the ban while not admitting the racism accusation.

"We agree to the court’s recommendation to open the park to all its visitors, without accepting the claims of either side," the agreement stipulated.

Adalah lawyer Fady Khoury said "we hope the message has passed to the Afula municipality as well as the other local authorities in Israel that the public space should be open in an equal manner to everyone regardless of ethnic or other identities."

While the court did not rule on the racism accusation, Attorney General Avichai Mandelblit published a legal opinion on Thursday saying that access to municipal parks "cannot be based on considerations of race".

Adalah said in a statement that one of its lawyers, Nareman Shehadeh-Zoabi, from Nazareth, recently tried to take her infant son to the park.

Shehadeh-Zoabi said in a video clip that she found a Hebrew-language sign at the entrance reading "the park is open... to Afula residents only."

She said that when challenged by a security guard and saying that she was not from Afula he said that was a problem.

Asked where she was from and answering that she was a resident of Nazareth, another guard said "that's even more of problem."

"It's racial discrimination," Shehadeh-Zoabi said. "I was prohibited from entering not because I'm not an Afula resident but because I'm an Arab citizen."

Adalah also posted a clip of Mayor Avi Elkabetz proclaiming during his election campaign, "Afula is in danger... We shall keep Afula Jewish."

Israeli Arabs, who make up around 17.5 percent of Israel's population, are Palestinians and their descendants who remained on their land in 1948, when the Jewish state was established.

The nerve of these immigrants. 3afoula is a Palestinian city stolen by immigrated jews who don't care about God yet claim "God gave us this land". And now they even want to go as far as keep a few Arab visitors out of a park. The invaders know they don't belong there, that is why they build walls, have apartheid, jewish only roads, jewish only parks etc. Pathetic.

It is just a pity that you can't visit Israel if it is only to show you just how far your claims are far from the truth.
In Israel there are 15 out of 120 members of parliament from minorities (moslems, christians, druze) This number is probably more than the combined number in the parliaments of Syria, Iraq, S. Arabia, Yemen, Kuwait, UAE, Yemen and Sudan.
In Israel there is an Arab member of the Supreme Court. in which Moslem state is there a minority person in that position.
In Israel there are non-Jewish senior officers in the Army and Police force.
In Israel there are thousands of non-Jewish Doctors, Nurses, Lawyers, Teachers, University Students etc.
Yet you call Israel an apartheid state. What a joke you make of yourself.

Which only goes to show that as far as the judiciary is concerned, every Israeli citizen, Jew, Moslem, Christian etc. is equal in the eyes of the law.