German Economy Feared to Have Stalled 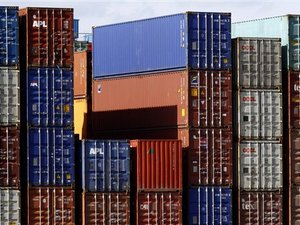 Germany's economy is expected to have slipped into reverse in the last quarter of 2011 in spite of showing an overall growth for the year of 3 percent, the country's Federal Statistics Office revealed Wednesday.

The country's annual growth rate was achieved in spite of the financial crisis in Europe which has other economies such as Greece, Spain and Italy struggling with huge debts.

"The German economy again grew robustly in 2011," the German statistics office, Destatis, said in a statement.

In 2010, the German economy grew by 3.7 percent after a painful contraction of 5.1 percent in 2009, which was by far its worst showing since World War II.

While the 2011 growth figure was as expected by analysts, the statistics office also said that the German economy likely contracted by 0.25 percent in the last quarter of 2011 — the exact figure for fourth quarter growth is due only in mid-February.

The chief economist for Commerzbank, Joerg Kraemer, expressed little surprise regarding the slowdown and told German news agency dapd he expected the German economy to shrink in the first quarter of 2012 as well.

Looking ahead, economic indicators also suggest 2012 will be a tougher year.

"While the German economy grew very strongly in the last two years, this year's growth will be much lower, especially because of the crisis in the eurozone," Ferdinand Fichtner, the head of the DIW economic institute, said in a statement.

Germany's strongest growth was seen in the first six months of the year, when consumer spending rose 1.5 percent — the biggest increase in five years.

Exports were also strong, according to Destatis, growing 8.2 percent compared with the year before. Imports rose 7.2 percent.

Simon Junker, an expert with the DIW institute, warned that expectations for the economy in 2012 were damped by the eurozone crisis and that both exports and imports would slow down.

"Germany's strongly export-driven economy will not be able to elude the slowdown of the global economy," Junker said. "Especially German exports will suffer from the eurozone crisis."

However, the DIW said, there is reason to be optimistic if the eurozone governments "manage to quickly and believably contain the crisis."