King Salman to ex-PMs: Harm to Lebanon Sunnis is Harm to Kingdom 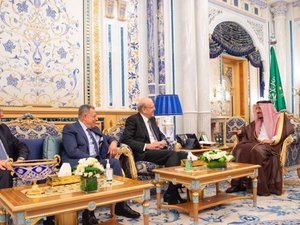 During the meeting, the monarch stressed “the importance of preserving Lebanon within its Arab neighborhood,” noting that “any harm against the Sunni community in Lebanon is harm against us in the kingdom.”

“The kingdom’s stance is clear and it wants security, stability and prosperity for Lebanon,” the king added.

Saudi Ambassador to Lebanon Walid al-Bukhari said the visit "carries the features of a promising future for strengthening the bilateral relations between the two countries."

A statement issued by the ex-PMs said King Salman "emphasized the importance of restoring respect for the Lebanese state and enabling it to extend its full authority with its legitimate forces over all its facilities and territories."

The monarch also expressed his desire to visit Lebanon, according to the statement, describing it as "the best forum in the Arab world."

The former premiers had met with Prime Minister Saad Hariri overnight. LBCI said the visit is “coordinated“ with Hariri, who will “hold consultations with the ex-PMs upon their return.”

“The three ex-PMs will discuss Lebanon’s latest situations, especially the issue of the premier’s powers, and they will answer the Saudi leadership’s questions about Lebanon,” LBCI quoted sources as saying.

“The visit comes at the request of the ex-PMs,” the sources said.

they do, they have hezbollah.

I’m flattered but also worried because i don’t like it when foreign leaders play the sectarian card, it’s wrong.

“The kingdom’s stance is clear and it wants security, stability and prosperity for Lebanon,” the king added. The same statement was made by the Ayatollah of Rockinrolla in Iran. If all Lebanese leaders would learn to be leaders instead of being called en-mass for a conversation with the King....instead they look like a high school reunion of the male version of ABBA....

It’s all 7aki...where was Saudi Arabia on the May 7 events ? And afterwards... it’s not like they didn’t kick most Lebanese out of Saudi Arabia in the past 2 years.

I have the utmost respect and deepest admiration for Mrs. Beiruti for believing 'Lebanon is a sovereign self governing state'.

“The protector of the rights of all Lebanese of any religion is the Lebanese Government”. Not really, it should be the Lebanese State, never some ministers. But we all know this State is a failed one. It’s corrupt to its core and it’s bankrupt both morally and financially.