Arslan Vows to Confront 'State within State' in Chouf, Aley 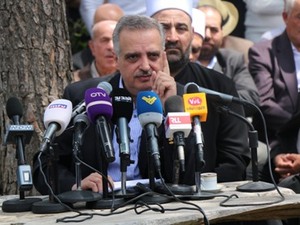 Lebanese Democratic Party leader MP Talal Arslan on Monday accused the Progressive Socialist Party of “building a state within the state” in the Chouf and Aley regions.

“The right of our martyrs will be taken, the era of hegemony over arenas and regions is long gone, people have freed themselves of malice and deprivation, and domination has ended,” a defiant Arslan tweeted, referring to the victims of the deadly Qabrshmoun incident.

“The attempt to build a state within a state will be confronted and a dignified, free and safe life for every human in Mount Lebanon will be imposed,” Arslan added.

“The state must fully shoulder its security and judicial responsibilities, or else the coming will be more dangerous,” he warned.

He added: “Our hand is extended and we’re open to any initiative based on the foundations that we have mentioned.”

Arslan has insisted that the Qabrshmoun incident should be referred to the Judicial Council, a top Lebanese court that looks into crimes against national security.

He has argued that the Qabrshmoun incident was an “ambush” and an “assassination attempt” against State Minister for Refugee Affairs Saleh al-Gharib.

The Progressive Socialist Party has meanwhile accused the minister’s bodyguards of forcing their way and opening fire on protesters.

Warning: democracy has been launched. You have ten minutes to get out of your present stance. This warning will not be repeated.

Finally, Arslan took a patriotic stance and decided to confront the hezbollah 'State within the State'!

This @POS should be publicly executed for treason.

The only thing he lacks is credibility.

And charisma, and beauty but above all intellect..

This syrischer hund must be put down for Lebanon’s sake. I’m since and tired of Syrian or Iranian laquais.

What a joke he has a parliamentary seat because Syria is building a state within state....

Dudes.. Now I get what happened!.. Saleh al-Gharib's two bodyguards died of laughter.. when they heard princess claiming this ridiculousness... :"the Qabrshmoun incident was an “ambush” and an “assassination attempt” against Saleh al-Gharib".. and said with and straight face... Ladies and Gentlemen.. I give you.. Princess Talal Arslan.. heir to the great Leslie Nielsen's Dr. Rumack.. take a curtsy, princess..

The Qabrshmoun incident was an “ambush” and an “assassination attempt”
Surely you can't be serious
I am serious, and don't call me Shirley
I expect Talal Arslan's nose to start getting longer and longer anytime now LOL

I am still in shock of how he turned out to be, politically. When we were school mates and classmates and dorm mates at International School of Choueifat he was nothing like he is today.

It's probably because back then his brother Emir Faysal was still the head of the Arslan family. Ironically the Syrians and Walid Jumblatt pressured Faysal, who was anti-Syrian, to leave politics and transfer the Asrlan leadership to Talal. The Syrians started to groom Talal and promised to make him overall leader of the Druze in Lebanon and Syria instead of Jumblatt. In 2001 the Syrians even tried to convince and coerce Patriarch Sfeir to visit Arslan as well as Jumblatt but Sfeir, realizing what they were doing, refused. Cynics would also point out that Arslan's so called Lebanese Democratic Party was created in 2001.