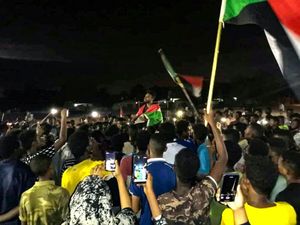 Sudan's feared paramilitaries have beaten and tortured to death a civilian in a town in war-torn Darfur, a doctors committee linked to the protest movement said Tuesday.

The civilian died on Monday in El-Daen, in East Darfur state, after members of the Rapid Support Forces (RSF)  clashed with youths accused of stealing a mobile phone, the committee said on its Facebook page.

"Members from Al-Janjaweed (RSF) militia beat and tortured a number of youths... on allegations that the youths had stolen a mobile phone," it said.

"One youth passed away due to torture by Al-Janjaweed," it said, referring to the RSF which has its origins in the militia that fought ethnic African rebels in Darfur during a civil war that broke out in 2003.

The doctors committee said a total of six civilians have died over the past three days at the hands of the RSF, including four members of a family run over by a vehicle driven by an RSF unit in Omdurman, the twin city of Khartoum.

The sixth person was killed by gunfire in El-Souki, in the southeastern state of Sinnar, as residents protested against the RSF, demanding they leave the town, according to the doctors committee and witnesses.

"The continuation of the barbarity and tampering with civilian’s safety daily by Janjaweed (RSF) militias, coupled with not holding them accountable under any law or code of ethics, prove that the Transitional Military Council protects these militias," the committee said.

It was not immediately possible to get a comment from the RSF.

On Monday, scores of protesters demonstrated in some parts of the capital, including at night, against the killing of the civilian in El-Souki.

Protesters and rights groups also accuse the RSF of carrying out the brutal raid on a protest camp in Khartoum on June 3 that left dozens dead and hundreds wounded.

RSF commander Mohamed Hamdan Dagalo, the deputy chief of Sudan's ruling military council, has denied such allegations as part of an attempt to distort the image of his paramilitary force.