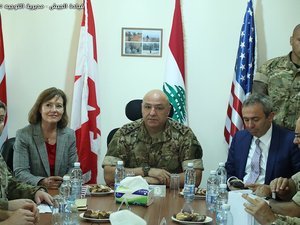 British Ambassador to Lebanon Chris Rampling and US Ambassador Elizabeth Richard met the Lebanese Army Commander Joseph Aoun at the Head Quarters of the Second Land Border Regiment to discuss progress on the security of the Lebanese-Syrian border, during the High Level Steering Committee (HLSC), the UK embassy said in a press release on Tuesday.

‘It is an honor to visit the Head Quarters of the second Land Border Regiment. These barracks played a significant role in operations against Daesh, and Nusra and ultimately led to the success of Fajr El Jouroud operation. Our visit today to discuss the progress on the security of the Lebanese-Syrian border exemplifies the trust in the Lebanese Armed Forces and how they have managed to ensure state control of the border with Syria.

I reiterated to the Commander the UK’s steadfast support to Lebanon through ongoing social, economic, educational and humanitarian projects, in addition to further support to the Lebanese Armed Forces and other security agencies. The LAF remains the sole legitimate defender of Lebanon.

We remain proud partners of the Lebanese army and we look forward to strengthening our military and security relations even further.’