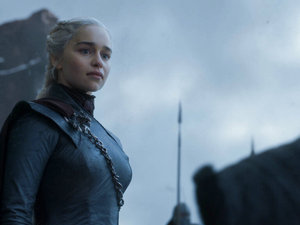 The final season of "Game of Thrones" smashed the record for most Primetime Emmy nominations by a drama series in a single year, earning a whopping 32 nods Tuesday.

HBO's fantasy epic enraged fans with its bumpy conclusion but still trounced the competition at the small-screen equivalent of the Oscars.

"The Marvelous Mrs. Maisel" -- Amazon's story of a 1950s housewife-turned-stand up comic -- was a distant second on 20 nominations.

"Thrones" was already the most decorated fictional show in the awards' seven-decade history, and now has 161 nominations overall, according to the Television Academy website.

The show about families vying for the Iron Throne broke a 25-year nominations record for a drama series in a single year previously held by "NYPD Blue," which earned 27 nods in 1994.

But there was disappointment for the final season of CBS ratings smash "Big Bang Theory," which failed to land recognition in either the comedy series or comedy actor categories.

And A-lister Julia Roberts was shunned by voters, who failed to select her performance in Amazon's "Homecoming."

HBO claimed 137 nods to Netflix's 117 -- a record for each, meaning the pair tighten their joint stranglehold on the prestigious awards.

Amazon Prime enjoyed a stellar year, more than doubling its haul to reach 47 nods, just behind NBC with 58.

As well as "Maisel," dark British comedy "Fleabag" performed well for Amazon, with five of its actresses receiving nominations including lead Phoebe Waller-Bridge.

The Television Academy's 24,000 members sifted through a record number of entries for this year's Emmys.

The nominations were announced in a livestreamed presentation from Los Angeles hosted by "The Good Place" actress D'Arcy Carden and "The Masked Singer" panelist Ken Jeong.

Final-round voting will now begin to pick winners who will be revealed at a glitzy Los Angeles show on September 22.