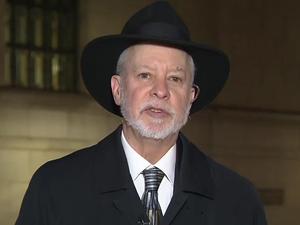 The rabbi of a Pittsburgh synagogue attacked last year by a white supremacist said Tuesday that the wave of hate will only end when racists feel ostracized, as he opened a major U.S. meeting on religious freedom.

More than 100 foreign delegations were invited to take part in the gathering in Washington, where President Donald Trump's administration, which enjoys strong backing from evangelical Christians, has made religious freedom a key diplomatic priority.

The ministerial-level meeting at the State Department came two days after Trump sparked global outrage with xenophobic attacks on four liberal congresswomen of minority background, one of them Muslim.

While speakers did not directly refer to Trump's remarks, Rabbi Jeffrey Myers of the Tree of Life synagogue, where 11 people were killed in October's shooting, drew applause as he noted that all in the United States other than Native Americans are immigrants or their descendants.

"I can submit this -- only when it is so totally unacceptable in society will any ill disappear, when leaders at all levels of government model the range of moral and ethical behaviors that we deem societal norms," Myers told an opening session launched by Secretary of State Mike Pompeo.

"When the media do not reward evil-doers with notoriety, when all religious and civic groups foreswear racism and bigotry, when perpetrators will feel ostracized by their racism and bigotry -- veritable Hester Prynnes with scarlet 'R's and 'B's on their clothing -- then will we see a lessening of this evil," he said.

He was referring to Nathaniel Hawthorne's classic novel "The Scarlet Letter" in which Prynne is forced to wear an "A" for committing adultery.

Myers, sporting a tie of the world's flags and a yarmulke, said he has vowed never again to use the word "hate" after the tragedy.

"We need to tone down the severity of our language. When we say the word 'H,' we get emotional.

"Emotional language leads to emotional responses -- violence such as the murder of 11 Jews in my synagogue" and other hate crimes against minorities, he said.

Billed by Pompeo as a crucial event, the religious freedom ministerial features dozens of panels by witnesses and activists from Rohingya Muslims who fled violence in Myanmar to Uighurs describing China's mass incarceration of the mostly Muslim minority to Middle Eastern Christians who have survived the lethal onslaught of the Islamic State movement.

Sam Brownback, the U.S. envoy on international religious freedom, said the initiative was not aimed at promoting a "common theology" but rather on ensuring rights for all people to believe whatever they want.

Calling religious freedom a "global crisis" that has drawn too little attention, Brownback said that 80 percent of the world's population lived in countries where there were some impediments on religious practice.

"It's time -- it is past time -- to bring down these religious restrictions so that the iron curtain of religious persecution can come down for one and all, and it comes down now," he said.

Reinforcing the universal theme of the gathering, Myers was joined at the opening session by a survivor of the massacre at a mosque in March in New Zealand and a representative of Sri Lanka's Christians, who were targeted in an Easter Sunday bloodbath.

Farid Ahmed, whose wife was among 51 worshipers killed in Christchurch, recited verses from the Koran and described how he had forgiven the assailant, an avowed white supremacist.

"I love him because he is my human brother, because the Koran has taught me that each and every human being is my brother and sister," he said from his wheelchair.