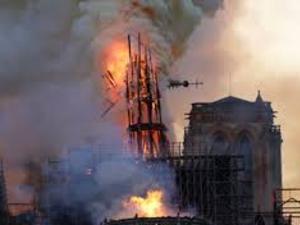 French MPs on Tuesday approved a law on the reconstruction of Notre-Dame, three months after flames ravaged the great Paris cathedral, but with the rebuilding process still mired in controversy.

The cathedral, part of a UNESCO world heritage site covering the banks of the River Seine in Paris, lost its gothic spire, roof and precious artifacts in the April 15 blaze.

Tourists in Paris are still heading to Notre-Dame to take photos and selfies, with the horrific fire only increasing its global fame, although they cannot access the esplanade in front of the building let alone the edifice itself.

But the passing of the reconstruction bill in the National Assembly -- after months of squabbles -- marked only the start of the hugely controversial and sensitive rebuilding process.

"The hardest thing is now ahead of us. We need to strengthen the cathedral for ever and then restore it," said Culture Minister Franck Riester as the bill was passed.

President Emmanuel Macron has said the reconstruction should be completed within five years, a deadline some experts see as too ambitious.

And he created an even greater furor by suggesting the toppled spire could be replaced by a steeple with a contemporary touch.

The "aim is to give Notre-Dame a restoration appropriate for the place it has in the hearts of the French people and in the entire world," said Riester.

The bill aims to organize the 850 million euros ($954 million) in donations which were pledged from individual, corporate and private donors after the blaze and to coordinate the painstaking restoration work.

French luxury goods rivals, the billionaires Bernard Arnault and Francois-Henri Pinault, pledged 200 and 100 million euros apiece and they are likely to disburse the funds gradually to ensure they are spent well.

But the bill's passage though parliament was held up by objections from the opposition, who complained the process was being rushed simply to ensure reconstruction was finished for the 2024 Olympic Games hosted by Paris.

Brigitte Kuster of the opposition Republicans said: "Imposing a deadline of five years from on high makes no sense."

But Riester insisted: "We are not confusing speed with hurry," adding that the cathedral was "not entirely saved" and that there was "still a risk" of collapse in some areas.

The upper house Senate and lower chamber National Assembly failed to agree on a common text and the draft then went back to the National Assembly -- where Macron's party has a majority -- in a slightly modified form.

Ninety-one MPs voted for the bill with eight votes against and 33 abstentions.

Riester also urged against complacency despite the high amounts pledged, saying that only 10 percent of these promises have been realized as actual donations.

The architectural form of the reconstruction is not directly addressed in the text although it was discussed in parliament, where some deputies expressed concern over Macron's interest in a "contemporary architectural gesture."

Meanwhile, the Paris authorities remain concerned about above average amounts of lead from the roof present in the area around the cathedral, meaning its immediate vicinity is still closed.

The scaffolding around the cathedral and white canopy serving as a temporary roof mean Notre-Dame is a shadow of its pre-fire self, even if the two great medieval towers were preserved in all their glory.

Dozens of workers are at the site every day but they are focusing on securing the site and clearing debris rather than restoration.

The vault in particular is at risk of collapse and the process of securing it will last until the autumn, according to the culture ministry. Only then can an architect carry out a thorough check of the edifice before restoration work begins.

Paris prosecutors said in June a poorly stubbed-out cigarette or an electrical fault could have started the fire and opened an investigation into criminal negligence without targeting any individual.

On June 15, two months after the fire, clerics conducted the first mass inside the cathedral since the blaze, donning hard hats along with their robes for their safety.