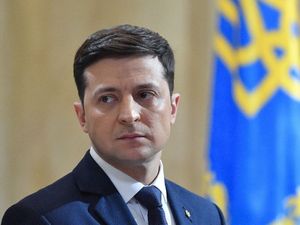 Three months after winning a landslide victory in Ukraine's presidential election, former comedian Volodymyr Zelensky is hoping to consolidate his success in parliamentary polls on Sunday.

Voter surveys show Zelensky's party Servant of the People -- named after a sitcom in which he starred as president -- is Ukraine's most popular political movement.

The 41-year-old actor with no previous political experience shocked Ukraine by becoming the country's youngest ever post-Soviet leader in April.

"We will be able to create a normal parliament with real professionals," Zelensky said in a video address on Tuesday.

Between 42 and 52 percent of Ukrainians who have already decided on their choice said they would support Zelensky's party, polls show.

Zelensky has promoted himself as an anti-establishment candidate with no current or former lawmakers standing for his party.

Instead he invited ordinary Ukrainians to run, and more than 30 members of the public were eventually selected.

The party that barely existed before Zelensky kicked off his presidential campaign on New Year's Eve promises to crack down on "corruption, looting, bribery and hypocrites".

Zelensky's rise has been viewed as a rejection of Ukraine's political elite for failing to revive the economy, root out corruption and end the conflict with Russian-backed separatists that began in 2014 after a popular uprising ousted a pro-Moscow president.

Parliamentary elections had been set to take place in October but Zelensky called early polls to cement his grip on power.

The ballot is expected to transform the parliament up to now dominated by the party of Zelensky's predecessor Petro Poroshenko.

"These will be absolutely new people," Iryna Bekeshkina, director of the Democratic Initiatives Foundation, told AFP.

"That is certainly what voters are longing for," she said.

Another anti-establishment politician, rock star Svyatoslav Vakarchuk, has also thrown his hat into the ring, and his recently launched Golos (Voice) party is growing in popularity.

Golos may enter parliament as polls show support of between four and nine percent. Like Zelensky, Vakarchuk has banned sitting lawmakers from his party list.

The influx of new faces may lead to major renewal after decades of domination by politicians who came of age when Ukraine was a Soviet state.

"It is likely that up to 75 percent of elected MPs will be novices," said Oleksandr Sushko, executive director at the International Renaissance Foundation.

Of more than 20 parties fielding candidates, several others are also likely to break the five percent threshold to win seats.

A total of 225 of parliament's 424 members are elected through party lists, while the rest are selected directly in single-member districts.

In a boon for the Kremlin, a pro-Moscow party called Opposition Platform–For Life is the second most popular in opinion polls, with up to 14 percent of voter support.

Party member Viktor Medvedchuk, who has claimed Russian President Vladimir Putin is his daughter's godfather, could return to parliament after a long absence.

Poroshenko's party -- now renamed European Solidarity after a makeover -- and the party of former prime minister Yulia Tymoshenko have up to nine percent and up to seven percent support respectively.

The size of Servant of the People's likely win remains unclear and it may need to form a coalition in order to govern.

The stakes are high. Zelensky must share power with parliament, which will nominate a prime minister and form a government.

Several respected reformers have been tipped as potential candidates for prime minister.

The outgoing parliament is hostile to Zelensky, with current lawmakers often defying the young leader by throwing out bills he has proposed.

Although some analysts fear possible chaos with inexperienced MPs in the new legislature, many Ukrainians welcome the renewal.

"Experience is not the main thing, the lack of experience in corruption is more important," said Valentin, a factory worker in Kiev, who plans to vote for Zelensky's party.