What Issues Are at Stake in Next Sudan Talks? 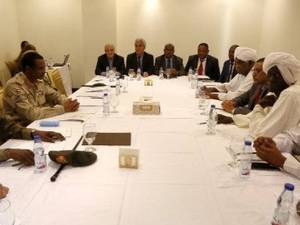 Just days after protest leaders and Sudan's ruling generals agreed a power sharing deal, they are set to meet again on Friday for talks on key remaining issues.

The two sides inked an accord Wednesday to form a joint ruling body tasked with creating a transitional civilian administration that would govern for just over three years -- a key demand of protesters.

They are due to convene again Friday to thrash out details of a "Constitutional Declaration" crucial to a succesful transition.

Doctors linked to the protest movement say that 246 people have been killed since the nationwide uprising erupted on December 19, including 127 people on June 3 alone when armed men raided a weeks-long protest camp in Khartoum.

The committee said another 1,353 people have been wounded since the protests broke out, initially against now ousted leader Omar al-Bashir and later against the generals who seized power.

The authorities have given lower casualty figures.

The generals insist the five military figures who will be part of the new joint governing body be granted "absolute immunity" from prosecution over the violence.

The demand is expected to be the most heated issue in Friday's talks.

Protest leaders have rejected this demand outright, and suggested "temporary immunity" that would be valid as long as the member is in service.

"If the Transitional Military Council remains stubborn then it will be a rock in the road of an agreement as all members of the protest movement refuse absolute immunity," Salih said, referring to the ruling generals.

TMC spokesman General Shamseddine Kabbashi told AFP Wednesday that there was "no dispute about immunity", without elaborating.

The protest leaders and generals agreed during initial talks in May to set up a 300-member transitional parliament, 67 percent of which would come from the protest movement, the Alliance for Freedom and Change.

But the generals have called for a review of the agreed seat allotments.

"This issue can be solved by ensuring that the 67 percent of lawmakers are widely distributed across all members of the protest movement, including rebel groups, NGOs and other movements," said Salih.

RSF commander General Mohamed Hamdan Dagalo, who is also the deputy chief of the military council, has dismissed the accusations as an attempt to distort the image of his troops.

Protesters have increasingly called for a withdrawal of the RSF from the capital's streets, and Salih said this could be another focus in Friday's talks.

"The RSF is a tribal militia and represents a threat to a democratic state," he said.

"They can't offer more, and if they do then they will lose the support from the street," said Salih.

"And if both sides hold on to their stances, talks will collapse."