Two Soldiers, Civilian Killed in East Ukraine ahead of Polls 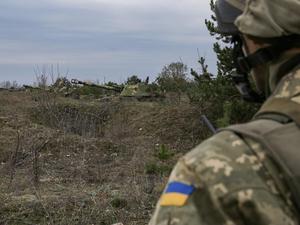 Two Ukrainian soldiers and one civilian were killed in incidents involving Kremlin-backed separatists, Kiev said Saturday, a day before the country votes in a parliamentary election.

The Ukrainian army's press secretary, Dmytro Gutsulyak, said the two soldiers were killed by sniper fire, and added that four other servicemen were injured.

In a separate incident, a 60-year-old civilian was killed just outside the separatist stronghold of Donetsk, he added.

The latest casualties were reported hours before a ceasefire was due to start early on Sunday.

Ukraine is to hold a parliamentary election on Sunday in which President Volodymyr Zelensky's party is expected to win the largest share of votes.

Since 2014, some 13,000 people have been killed in the war which erupted after a popular uprising ousted Ukraine's pro-Kremlin president and Russia annexed Crimea.

Kiev and its Western backers accuse Russia of funnelling troops and arms across the border to fan the flames of the conflict.

Moscow has denied the claims despite overwhelming evidence to the contrary.

Zelensky has suggested that the US and Britain should also be included in peace talks that currently involve Germany, France, Russia and Ukraine.