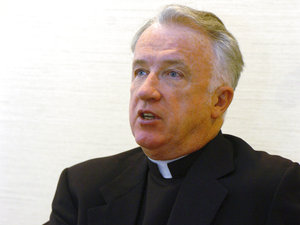 Pope Francis has banned a former U.S. bishop accused of sexual harassment and of financial mismanagement from performing the liturgy, the Vatican News website reported Sunday.

The measure was among a series of sanctions the pope had issued against Michael Bransfield, the website reported, citing a statement from Bransfield's former diocese in Wheeling-Charleston, West Virginia, in the United States.

Bransfield was also forbidden to live in the diocese and instructed to make personal amends for the harm he had caused, said the statement.

The nature and extent of those amends will be decided by the future bishop of the diocese, said Friday's statement.

Bransfield resigned in 2018 soon after his 75th birthday, after the allegations against him emerged of sexually harassing adults.

An investigation led by Archbishop William Lori of Baltimore reported in June that the accusations against Bransfield were credible.

Pope Francis has been taking stern measures against disgraced members of the clergy. In February, he defrocked the former U.S. cardinal after accusations of sexual abuse of boys and young men.

In the wake of these scandals, the U.S. Catholic church had reinforced its system for reporting abuses in line with the recommendations by the pope.

At a June meeting in the northeast state of Maryland, the 224 members of the U.S. Conference of Catholic Bishops agreed a change to their ordinances making it compulsory for the clergy to report abuse to the Vatican.

Until now, internal investigations were carried out by the bishops denouncing the offences, at their discretion.