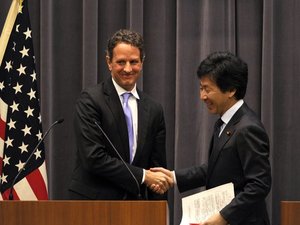 Japan gave a boost Thursday to the U.S. campaign to sanction Iran over its nuclear program, pledging to buy less Iranian oil, a day after China reacted coolly to the U.S. effort.

Iran's "nuclear development problem can't be ignored by the world, so from that perspective we understand the U.S. actions," Finance Minister Jun Azumi told reporters after meeting with U.S. Treasury Secretary Timothy Geithner, who was visiting Tokyo after two days in Beijing.

Japan imports about 10 percent of its oil from Iran, Azumi said.

"We plan to start reducing this 10 percent share at soon as possible in a planned manner," he said.

Japan's quick agreement contrasts with China's public silence on the matter during Geithner's visit there. A diplomat who briefed reporters about an upcoming Middle East trip by Premier Wen Jiabao repeated earlier government statements rejecting sanctions as a way to resolve the dispute with Iran.

Geithner's trip to Asia's two largest economies is part of a global lobbying effort to win support for the sanctions aimed at halting what Western governments say is Iran's effort to develop nuclear weapons. The sanctions, targeting the oil industry, would bar financial institutions from the U.S. market if they do business with Iran's central bank.

Iran has threatened to respond to sanctions by shutting the Strait of Hormuz, a transit route for a fifth of the world's oil.

"To place one country's domestic law above international law and press others to obey is not reasonable," Foreign Ministry spokesman Liu Weimin told reporters at a regular briefing Wednesday.

Experts said Tokyo's move to reduce imports from Iran would likely have limited negative impact on Japan's economy as the country would probably be able to increase imports from other major oil producers such as Saudi Arabia and the United Arab Emirates.

But the sanctions — and accompanying geopolitical tension — could raise global oil prices and undermine the world economy.

"We're more concerned about the risk of the Iran problem becoming bigger and possibly leading to global economic instability through a possible increase in oil prices," said Hiromichi Shirakawa, chief economist for Japan at Credit Suisse in Tokyo.

The timing is also bad for Japan as the country is already facing an energy crunch. Most of its 54 nuclear power plants are offline because of routine inspections, mechanical problems or stress tests in the wake of last March's nuclear crisis at the Fukushima Dai-ichi nuclear power plant.

China, the world's biggest energy consumer, depends on Iran for 11 percent of its oil imports. China bought about 600,000 barrels of Iranian crude per day in November, nearly one-third of Iran's daily exports of 2.2 million barrels, making Chinese cooperation key to the success of sanctions.

"If the Chinese and maybe the Indians are not going to be abiding by U.S. pressure, then I don't think there will be a major impact on oil prices," said Koichiro Tanaka, director of the JIME Center at the Institute of Energy Economics Japan in Tokyo.

Geithner told reporters in Tokyo that the U.S. was working closely with "countries around the world to substantially increase the amount of pressure we bring on Iran" by cutting off "the central bank from the international financial system and to reduce the earnings Iran derives from its oil exports."

He characterized the effort as being "in the early stages."

"We very much appreciate the support Japan has provided in standing with us and the international community in support of this very important strategic objective," he added.

During their one-hour meeting, the Azumi and Geithner also discussed the eurozone debt crisis and Japan's reconstruction from the tsunami disaster in March.

"The leaders of Europe appear to be making some progress in containing their crisis," Geithner said, adding that the U.S. was "fully prepared to support a more substantial role" by the International Monetary Fund in supporting the European response.

In a veiled reference to China, Geithner said the U.S. wants to see a stronger commitment by emerging economies in the Group of 20 to flexible exchange rates. The U.S. contends Beijing keeps its yuan undervalued, giving its exporters an unfair price advantage.

"We want to see those emerging market currencies that are undervalued continue to appreciate against the major currencies, against the dollar, the yen and the euro," Geithner said.