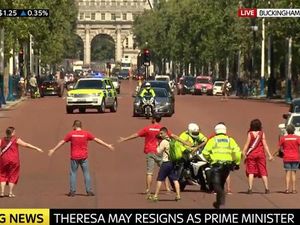 Greenpeace activists on Wednesday briefly blocked incoming British prime minister Boris Johnson's convoy as it made its way to Buckingham Palace, urging him to take action on climate change.

Activists wearing sashes reading "Climate Emergency" linked arms across The Mall, the road that leads to Queen Elizabeth II's London residence, where Johnson was heading to be confirmed as prime minister.

Police quickly bundled the protesters to the side of the road, but they were also able to unfurl a banner reading "Climate Emergency" in front of Johnson's car.

"Climate change needs to be front and center of this new administration from day one," Sauven said in a statement issued after the protest.

"We can't blunder and bluster our way out of this emergency. Boris Johnson must get to grips with the climate emergency or be remembered as the prime minister who jeopardized our children’s future."