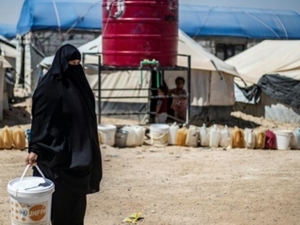 Maha al-Nasser queues in front of a crowded clinic in Syria's Al-Hol camp, her frail daughter squirming in her arms under the stifling desert heat.

"My daughter has suffered from convulsions and malnutrition," said 30-year-old Nasser, her face covered in a black veil.

"When she convulses, she loses consciousness and foam comes out of her mouth," she told AFP at the Kurdish-run camp in northeast Syria.

Nasser and her daughter Fatima are among tens of thousands of people who were trucked into Al-Hol earlier this year from the eastern Syria village of Baghouz.

Kurdish-led forces expelled the last Islamic State group fighters from the riverside hamlet in March, after streams of people poured out of the jihadists' embattled holdout.

Months later, they are among the 70,000 people -- mostly women and children -- packed into the camp, where residents depend on aid and complain of endless illness, dirty water and boiling hot tents.

Fatima -- now 14 months old -- started showing signs of high fever months ago, but medication was not immediately available and her condition worsened, her mother said.

Despite two visits to a hospital outside the camp, her health has still not improved, Nasser added.

"The medical situation is bad," said the mother of six, whose husband is detained with other suspected jihadists in Kurdish-run jails.

"Children constantly have diarrhoea. Disease is rampant in this cursed camp," she said.

In the courtyard of a medical centre run by the Kurdish Red Crescent, women dressed from head to toe in black clutch children, some wailing non-stop.

Once in a while, a member of the Kurdish security forces brings in a foreign woman from another section of the camp under tighter security.

The clinic's head Ramadan Youssef al-Daher said heat, poor sanitation and water shortages are contributing to the spread of diseases in Al-Hol.

He said his clinic sees around 50 children every day, many with cases of diarrhoea and malnutrition.

"Twenty children died this month, some during childbirth, others because of malnutrition," he told AFP.

Most of Al-Hol's residents are Syrian or Iraqi.

And more than two-thirds are children, according to the UN Children's Fund.

Foreign women and children are housed in a separate annexe, and most have little hope of returning home as Western countries have been largely reluctant to take them back.

Human Rights Watch on Tuesday described the camp as a "dustbowl inferno".

It described "young children with skin rashes, emaciated limbs and swollen bellies" sifting "through mounds of stinking garbage under a scorching sun".

The rights group warned that many children in the camp "are dying from acute diarrhoea and flu-like infections".

The Kurdish authorities have repeatedly appealed to the international community for support to manage Al-Hol and other camps housing displaced civilians and suspected IS family members.

They have also asked for help to prosecute suspected IS fighters held in Kurdish-run jails.

Between endless rows of white tents in Al-Hol, children fill jerry cans with water from a tank provided by the Kurdish authorities.

Umm Talha, another camp resident, complained of slow healthcare and water she said was sometimes green or yellow.

"It's salty, and we don't know where it comes from," she said.

Umm Osama, from Syria's northern province of Aleppo, said she was fed up with eating just rice and bulghur wheat.

"They don't give us anything. They just want to humiliate us," she said.

In April, the Kurds announced they had struck a deal with Baghdad to repatriate 31,000 Iraqis -- but no transfers have yet gone ahead.

Umm Huzeifa, a 34-year-old Iraqi, said the time had come to leave.

"They've imprisoned us," she said.

"Let them open up the door, let us out!"

Fellow Iraqi, Umm Osama, said enough was enough -- besides, she disapproved of the education children were receiving in the camp.

But "when we go to pick them up, we find them dancing dabkeh," she added, referring to the traditional Middle Eastern line dance.