Mashrou' Leila to 'Apologize to Christians' before Byblos Gig 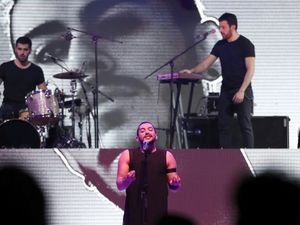 A Lebanese indie band is to play at a music festival in Byblos next month, but only after apologizing for two songs deemed offensive to Christians, organizers said.

They have played frequently in Lebanon since forming in 2008 while studying at the American University of Beirut.

But they have sparked controversy in Egypt and were banned from performing in Jordan.

On Monday, Lebanese Christian clergymen called for the band to cancel their planned performance at the high-profile summer festival in the seaside resort of Byblos, charging that their songs were offensive to Christians.

On Facebook, a group calling itself the "Soldiers of God" started a campaign against the concert, posting warnings suggesting it would take to the streets to prevent the event from taking place. Others weighed in, starting a hashtag that called for stopping the performance.

Late Wednesday, the festival's artistic director, Naji Baz, said a compromise had been reached after a meeting with the town's Maronite bishop.

"We reached an arrangement whereby the concert will happen as planned, as long as the band holds a press conference in the coming days," he said.

The band are to "apologize to all those who may have been offended" by two of their songs considered to be "insulting to sacred symbols in Christianity," he said.

The two offending songs -- titled "Idols" and "Djin" -- will not feature in their set at the festival on August 9, he said.

The band took down posts "violating sacred symbols of Christianity" at the request of the State Security agency, the prosecutor’s office said.

The rhetoric by religious and conservative figures spurred a response from activists, rights groups and outraged Lebanese, angry over what they see as their country's mounting suppression of freedom of expression.

"This is so ridiculous. The whole world seems to be regressing into illiberalism," wrote renowned Lebanese-American writer and novelist Rabih Alameddine, who performed with the band at The Met Breuer in New York earlier this month. "Mashrou' Leila is one of the greatest things to happen to the Middle East."

Social media activists have meanwhile called for a Monday sit-in at the Samir Kassir Square in solidarity with the band.

It was not clear what specifically triggered the current outburst. Some critics cited a photo shared online by Sinno that depicts a painting of the Virgin Mary with her head replaced by the pop star Madonna.

The band issued a statement on Monday saying they "respected all religions and their symbols," and were saddened by "the distortion of the lyrics of some of our songs."

Amnesty International issued a statement Tuesday calling on the Lebanese government to ensure the band is protected and the concert goes ahead.

"It is unconscionable that there continue to be such calls emanating from institutions that are meant to serve as role models to their constituencies, and can and should be upholding the right to freedom of expression," said Lynn Maalouf, Amnesty's head of research for the Middle East.

The debate has been trending on Twitter for days.

In a country beset by political, economic and financial troubles, many lamented the focus on the arts and censorship.

Columnist Diana Skaini, writing in the daily An-Nahar, said the debate goes beyond Mashrou' Leila, to the heart of Lebanon and its message as a country.

"Either we consecrate bans and populism and say goodbye to what remains of this moderate spot, or we confront this tyrannical wave that goes against our pluralistic and diverse country," she said.

After a Mashrou' Leila concert in Egypt in 2017, at which members of the audience waved a rainbow flag, the authorities launched a crackdown on the country's LGBT community.

Planned performances by the band in Jordan were canceled in 2016 and 2017, amid protests by conservative lawmakers.

" Maybe the Christians of Lebanon are more secular than the Moslems"

I had to laugh at that statement. The largest Christian party in Lebanon is the FPM and the majority of Christians in Lebanon vote and support the FPM. Are you saying that Bassil, Kanaan, Bou Saab, and Aoun are more secular than Berri, Hariri, Junblatt, and nassrallah? What a joke!
This coming from someone who is Christian himself.