Why is Portugal So Prone to Wildfires? 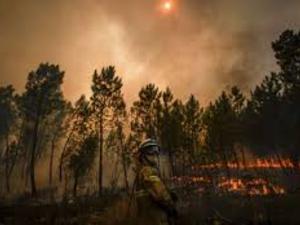 The exodus of people from the countryside to cities compounds the problem, they added.

About 850 firefighters were working Wednesday to extinguish the embers of three major blazes which ripped through the heavily forested Castelo Branco region, 200 kilometers (120 miles) north of Lisbon, since Saturday.

The flames scorched large areas and left a trail of blackened destruction.

This is a familiar scene in Portugal, where wildfires break out every summer, from the southern Algarve tourist region to the country's more verdant northern edge near the Spanish border.

Most firefighters in the Atlantic coast country are volunteers and a fast-spreading fire can quickly overwhelm their efforts to contain it.

Once they have a fire under control Portuguese firefighters need to do a better job of keeping it contained by, for example, using chemical fire retardants as in other countries, Domingos Xavier Viegas, an expert on forest fires in Portugal at the University of Coimbra, told AFP.

"Often a fire is controlled at night and then it rekindles in the morning," he said.

"It is natural that there be fires. The problem is that in Portugal they quickly transform into large-scale ones."

Experts say Portugal needs to plant more oak, chestnut and other more fire-resistant trees instead of the pines and eucalyptus found across the country.

Large swathes of central and northern Portugal are covered in unbroken stretches of forest, without any gaps in vegetation that can slow or stop a wildfire, said Carlos da Camara, a climatologist at the University of Lisbon.

"Forty years ago there was a natural discontinuity (to forests) because there was agriculture. The landscape has changed," he told cable news channel SIC Noticias.

Since younger people move to cities in search of better opportunities, much of the population of the countryside is made up of elderly landowners who often fail to clear brush from their plots and from around their homes, providing undergrowth that is fuel for wildfires once hot weather arrives.

Portuguese towns and villages are often nestled in or next to forests, and many farmers and residents continue to burn dead leaves on their land even in drought conditions, said Viegas.

"There is still a lack of awareness of fire risks," he added.

Da Camara said summers in Portugal have become hotter, drier and longer due to climate change, which boosts the risk of wildfires -- a theory supported by numerous peer-reviewed studies.

The peak fire season, which used to run from July to September, now starts in June and ends in October.

"Weather conditions and the characteristics of our forests make large-scale fires inevitable," Interior Minister Eduardo Cabrita told reporters during a visit on Tuesday to areas ravaged by fire in Castelo Branco.

But he said government measures introduced after the country's deadliest wildfires in history when 114 people died in two separate blazes in June and October 2017 were starting to make a difference.

These include a gradual reduction of eucalyptus cultivation, new rules requiring property owners to clear a 50-meter (164-foot) radius around isolated houses and the use of goats to clear woodland of undergrowth.

"Climate change and the traits of our forests demand a response which is already being given. We must keep up this work," the minister added.